This week I feel like we have finally adjusted to life in an RV. It isn’t taking us half as long to unpack or pack up as it did at first. Everyone seems to pitch in and get it done. Gas station stops are not the heart pounding events they used to be as my husband has a better idea of just how much room he needs to maneuver our 27 foot home around the pumps.

We still have rough moments, and I am sure those will continue, but for the most part, now we are feeling comfortable as RV owners, drivers, and occupants.

Now let’s get on to what we got up to this week! 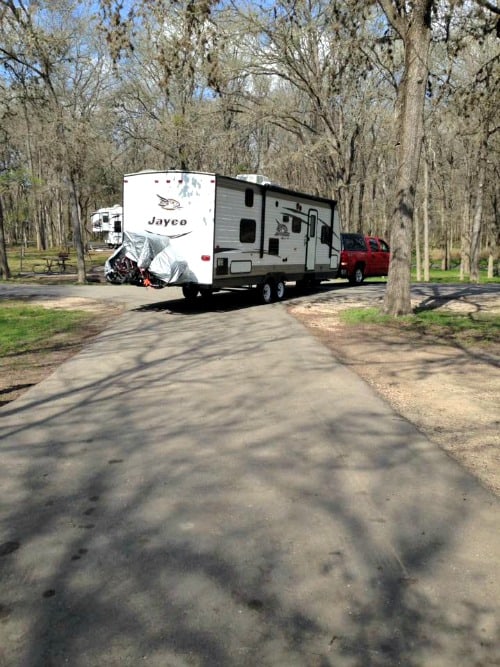 Early Sunday afternoon we pulled into our camping spot at Palmetto State Park in Texas. I liked this state park. There were lots of trails bordering the campsite that I explored the first afternoon on my bike. On one morning that we were there, I managed to get out and take a 50 minute run around the park and the area was beautiful! 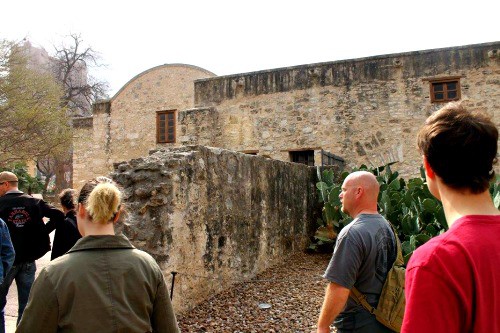 We drove into San Antonio Monday. We explored the Alamo first. I enjoyed the storyteller who was explaining the story behind the Alamo in one of the court yards the best. She brought the whole history of the Alamo to life. 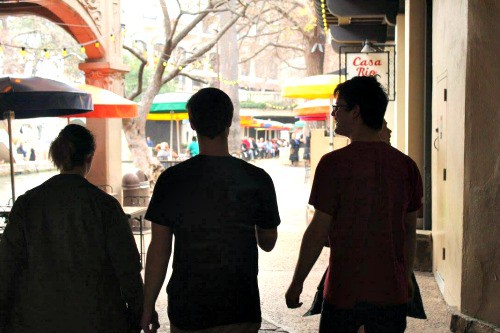 After we were finished exploring the Alamo, we headed down to the river walk area.

Just as we were coming out from under a tunnel, I snapped this shot. This here is what my husband and I want to see happen the most on this trip. This here is all three children enjoying a conversation together. You see, there are 4 1/2 years between our first two children and then just two years between the second and third child. We didn’t want that big initial gap. It just happened that way.

Over the years the age gap has meant that the second and third grew very close, but our 1st is often left out. To see all three talking and laughing like they are above–it warms this mom’s heart. Of course, they are not getting along perfectly, last week we witnessed an entirely different type of sibling moment! 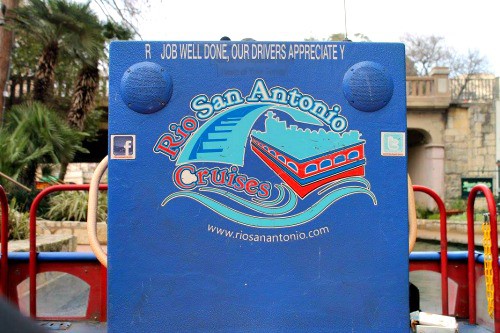 After lunch on the river walk, we headed over to take a guided tour of the river walk area. I highly recommend this tour to anyone who visits the San Antonio river walk area. Our guide pointed out sites that I would have given just a glance to and told us the history of what we were seeing. 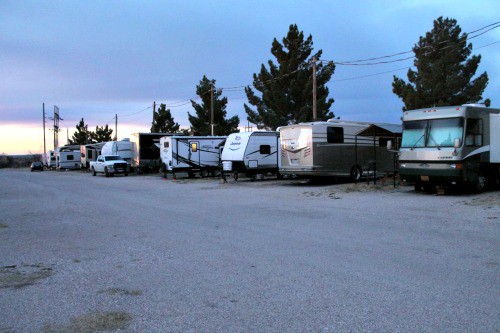 Tuesday morning we left on what was a two-day journey traveling through the rest of Texas. We did stop Valentine’s night in Fort Stockton and grabbed dinner, groceries and got our laundry caught up before heading out the next morning to our next two night stop near Carlsbad Caverns National Park.

I wasn’t overly impressed with our RV park near Carlsbad Caverns; the staff was friendly, but besides that, the RV park was a downer. The bathroom was clean, but the shower area was so unsuitable that two of our children and I refused to shower in it and just made do with the mini shower in the RV.

We were also shoved in like sardines. Seriously, my neighbor and I could have reached our hands out the window and passed each other items. There was perhaps a foot between our trailers once the slide-outs were out.

But the natural environment around the RV park was fantastic and more than made up for the tight quarters. 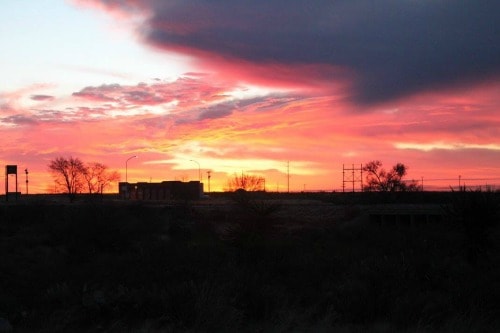 I woke up to the most BEAUTIFUL sunrise Thursday morning. I can’t believe I almost missed it. I was working hard in the RV trying to get Friday’s post done when I felt a nudge to go outside for just a moment. I am so glad I listened. The morning sky looked like it was on fire. 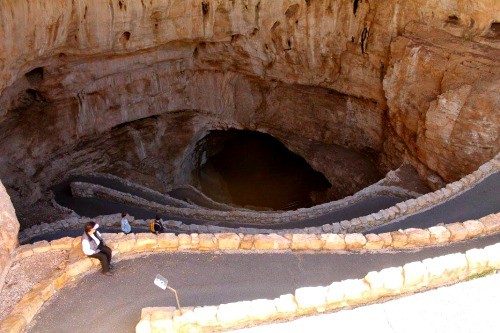 Thursday afternoon we headed up the mountain to Carlsbad Caverns National Park. This was the first of many National Parks we plan to visit on our trip, so we bought an annual pass for $80 that will give four members of our family entrance at each park we visit at no extra cost for the rest of our trip. Considering we visited another National Park on Saturday the $80 pass is already almost paid for.

I have to admit I was a little worried about whether I could tour the caverns or not. You see, many years ago my husband took me to visit a cave in Kentucky, and I had a minor anxiety attack as we climbed down this dark and narrow staircase straight down to the cavern below. We had 20 people or so in front of us and 20 or so more behind us. Considering I am not a fan of crowds or small spaces I barely was able to talk myself through that experience mentally.

Carlsbad Caverns was nothing like that, though. It was broad and open the entire way, and except for one small portion, it was well lit too. My pictures did not show just how beautiful and vast the cavern was. I couldn’t stop oohing and ahhing. 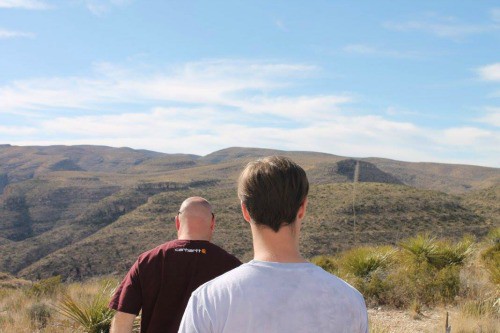 As we were leaving Carlsbad Caverns, my husband noticed a sign for a nine-mile scenic gravel road down to the valley below. I am so glad he saw it, and we had a truck that could take it because the views along the way were incredible.

I have to say I am in awe of the beauty of New Mexico. I cannot believe how a landscape that appears so barren can be at the same time so beautiful. 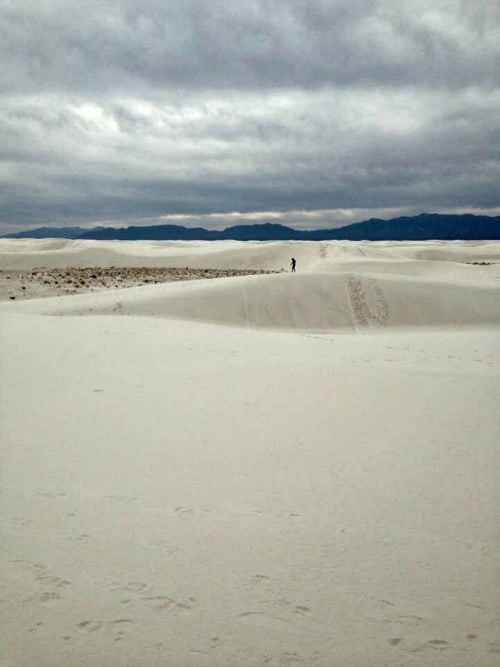 Friday we spent traveling to Alamogordo, New Mexico which is just outside White Sands National Park. We arrived late afternoon and spent some time grabbing groceries and such.

Saturday we had a relaxing morning. I spent more time cuddling up in bed with the hubby than I have in years! Guys, I didn’t get out of bed until almost 8:00 a.m. For me, that is like sleeping until noon.

The kids were still sleeping so the two of us went out to breakfast at Denny’s. After that, I did some blog work while he took care of some RV maintenance.

After an early lunch, we headed out to White Sands National park. We grabbed two sleds and wax for them at the gift store on the way into the park.

We spent the next few hours enjoying the miles of white sand hills. Hiking them, sledding down them and even rolling down them. 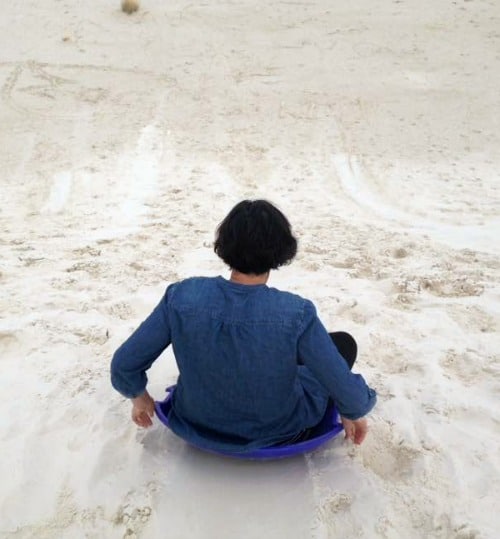 Yep! Even I got in on the sledding fun. I had some massive wipe outs too! In fact when I went to shower later that day I had so much sand in my scalp it took me FOREVER to rinse it all out.