We saw so many beautiful things this week it was tough to pick just ten pictures. I have a feeling that is going to be the case for these last few weeks of our trip. Looking at our agenda, we have crammed these final weeks with a lot of travel and sightseeing. 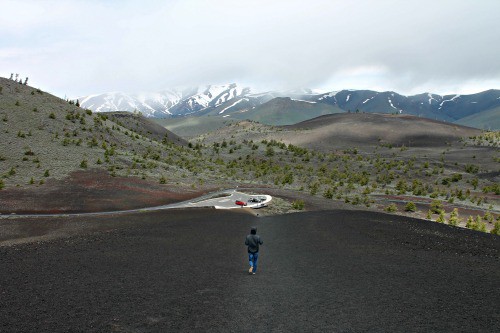 We started our week with an incredibly long drive from Polson, Montana on the shores of Flathead Lake to Arco, Idaho–just a short drive from Craters of the Moon.

I wasn’t sure what to expect at Craters of the Moon National Monument, but once again I fell in love with yet another National Park–or monument, I should say.

The area was full of different types of volcanic features. From the Inferno Cone Mountain pictured above to the caves created by lava tubes such as Indian Tunnel Cave pictured below. 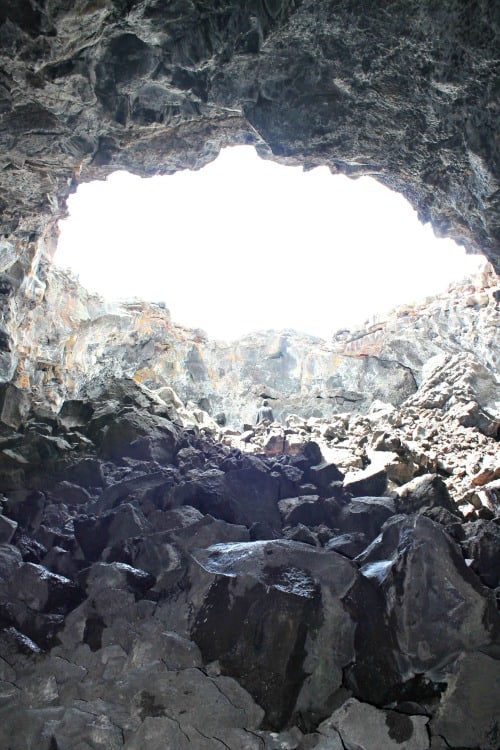 Indian Tunnel cave went on for quite a while and turned out to be a bit of a climbing adventure in parts as we maneuvered around piles of rubble and snow. 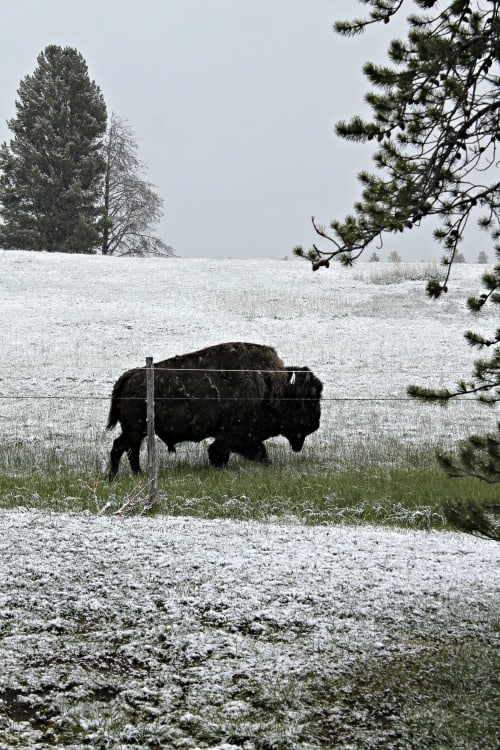 Tuesday we moved to a KOA just outside the West gate of Yellowstone. We woke up Wednesday morning to snow! My mind had a little trouble wrapping itself around the idea of snow in mid-May. Thank goodness for the long johns we bought everyone before we entered the Grand Canyon area back in February where we got over a foot of snow. They have come in handy several times now as we have faced exploring in freezing temperatures.

The morning brought more surprises than snow though, as we also got to see our first Bison–or Buffalo–whatever you prefer.

Later in the week we also saw bears (seen here), and even moose (seen here). 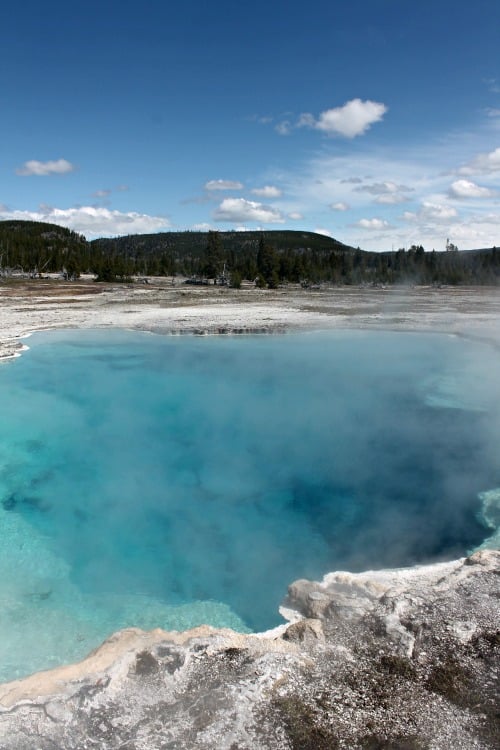 After a leisurely morning at the campsite, we bundled up and headed out to explore the portion of Yellowstone that was open that day. Several roads were closed, but we were still able to see many basins, geysers and of course–Old Faithful.

The basin above was called Sapphire Pool, and it was my favorite because of its beautiful color and clear water. 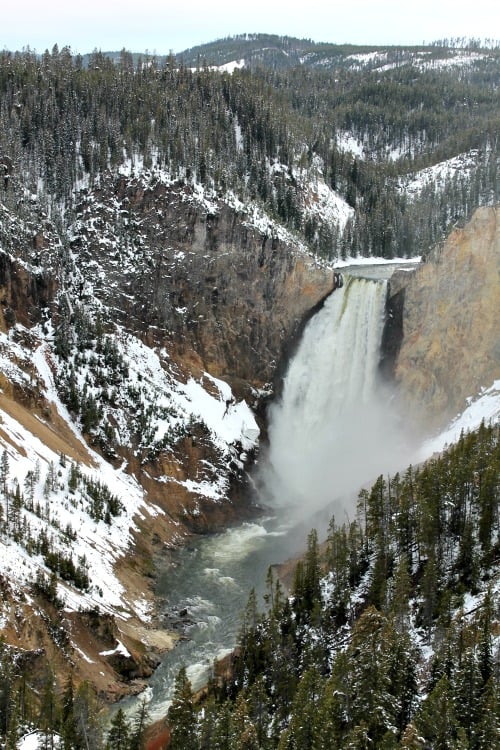 I am a HUGE lover of waterfalls, and so, of course, we had to check them all out. 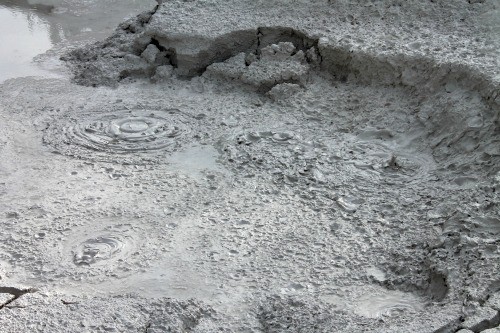 Yellowstone is such a geographically diverse park with canyons, waterfalls, geysers, basins and more.

I liked pretty much all we saw, but the spitting mud pots I found most entertaining. I don’t know why, but it just made me giggle watching them spit mud up into the area–and oh, the sounds they make as they do it. Yeah, perhaps I am still not beyond 5-year-old potty humor. 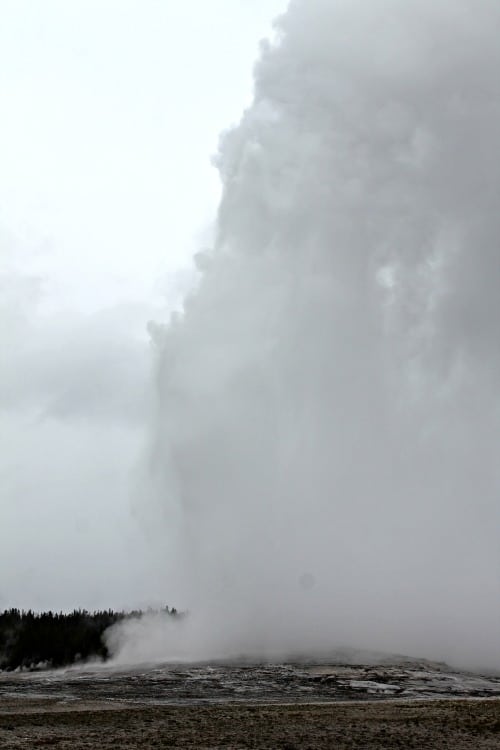 We stood for 20 minutes waiting for Old Faithful to put on a show. It was worth it in the end. Because it was so cold, there was a lot of steam mixed in with the water, so our pictures don’t do it justice. 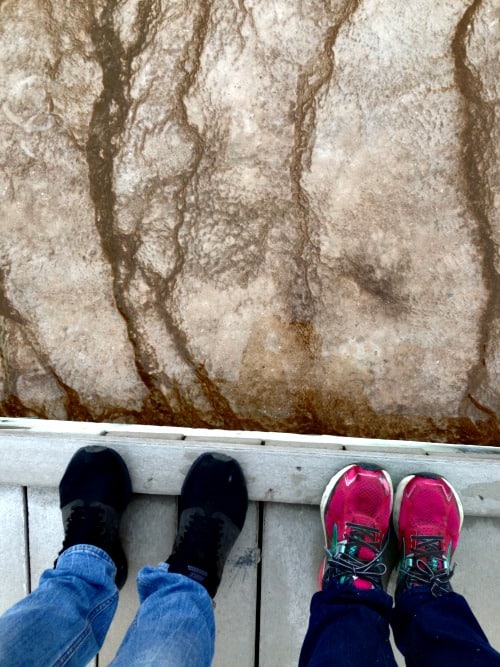 WARNING: If you ever go to Yellowstone on a wet day, be prepared to end up with really smelly shoes. As in so smelly that you can barely stand the smell on the ride home and when you get home you throw them outside, so they won’t smell up your home.

My guess is they pick up smells because you are walking on these wooden paths directly over ground that has a high concentration of sulfur. The ground is also steaming, making your shoes even wetter and helping the smell permeate further into them. 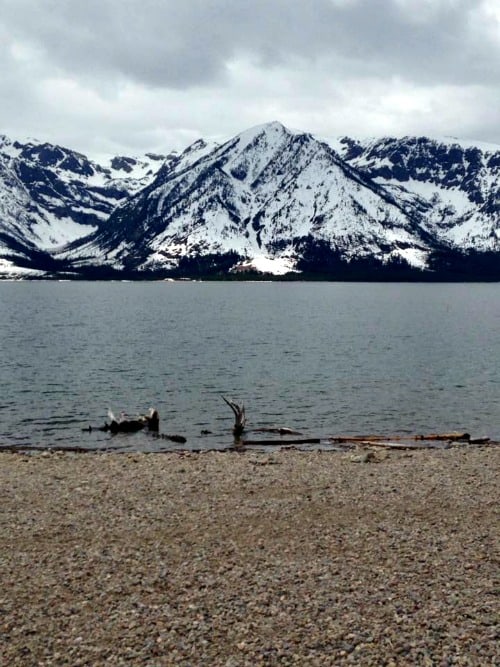 Friday we headed to Grand Teton National Park where we have been soaking up mountain views. 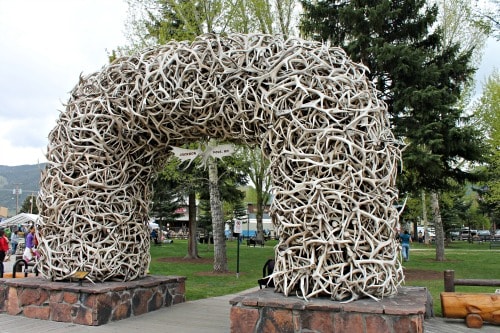 We also headed into nearby Jackson for just a few minutes. Just long enough to grab a few pictures of the famous antler arches and grab some belated Mother’s Day frappuccinos from Starbucks.

My daughter and I have gone out every Mother’s Day for years to Starbucks for the 1/2 price frappuccino sale. But this year we were not near one on Mother’s day, so when I saw one in Jackson, she and I indulged in our ritual a few days late–and unfortunately at full price, but it put a smile on her face and mine, so it was worth it.

How To Follow Us Now That The Journey Is Over

My husband and I are currently traveling one weekend a month, you can check out our adventures on our blog The Parents Flew The Nest.

We also have an Instagram account that we keep updated with our most recent travels — @theparentsflewthenest is where you can find us there.

Week 19 Update Carters of The Moon, Yellowstone, and Grand Teton (you are here)