In a matter of hours this week we went from jeans and a sweat-shirt weather to shorts and a tank top weather–and thankfully I think that is where we will be for the remaining two and a half weeks of our trip. 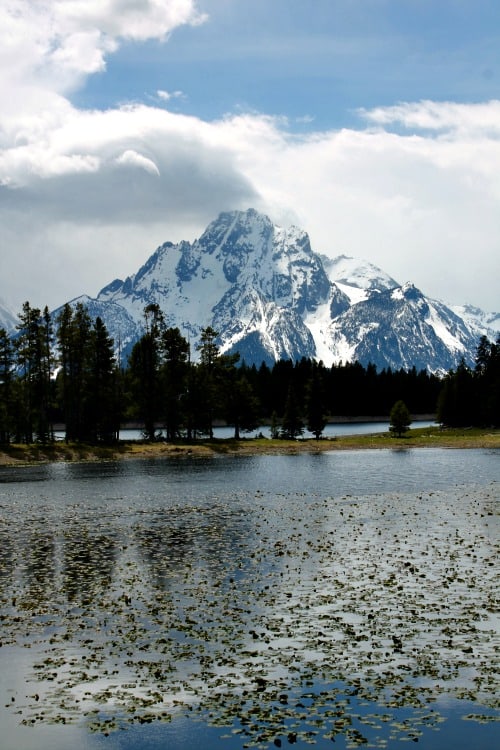 We started our week with a second try at a long hike. You might remember that back when we were in Glacier National Park we attempted a mountain hike that turned out to be just a bit too much for one of our crew.

This week we tried a slightly shorter loop with minimal elevation (hills). We went 10 miles in total around the rim of Hermitage Point on Jackson Lake in Grand Teton National Park.

The loop trail was full of beautiful lake and mountain views, but I think the prettiest views on the entire trail were those near  Heron pond (pictured above).

Weather that afternoon was perfect for hiking– not too hot with just the right amount of breeze. The entire family enjoyed it. 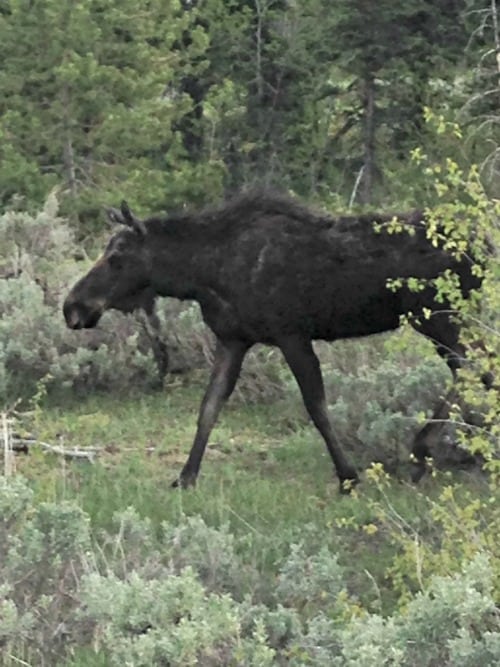 My husband and I got to see moose up close on our first afternoon in Grand Teton National Park, but unfortunately, our kids were not with us. I don’t know why, but I was suffering some self-imposed mother guilt from this fact that only got worse when I saw another moose early one morning while I was all by myself working at the Jackson Lodge.

So I asked the park rangers when was the best time and place to have a chance of seeing another moose. Using her suggestions, we took the kids out moose hunting the next two nights just as the sun was beginning to sink. The first night we came back without seeing a single one. However, the second night I convinced my husband to drive just a bit further (okay–a lot further), and we were rewarded for our efforts.

There on the side of the last road, my husband was willing to drive down was a moose! And it was extremely close too. 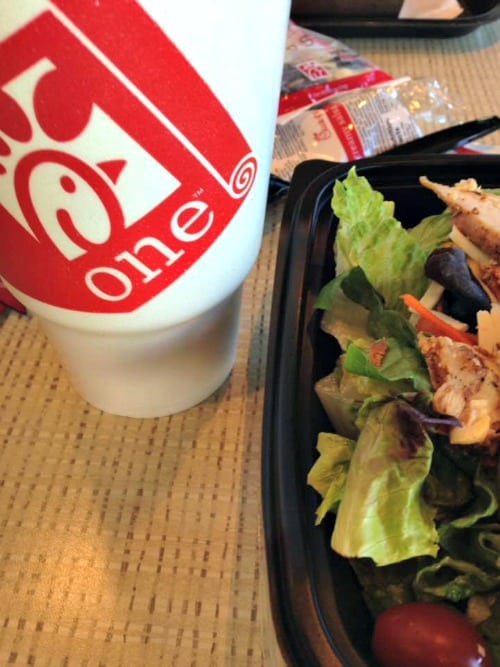 Tuesday morning we left Grand Teton National park while bundled in sweatshirts and long pants. By mid-afternoon, we arrived in Salt Lake City, Utah where we all changed into shorts and t-shirts. Although we all have enjoyed the mountain and wildlife views of the last week or so we were so happy to see what we consider normal temperatures for May.

That evening we left our campsite in search of dinner out and groceries. We ended up stopping at Chick-fil-A for dinner. Normally we like stopping at locally owned restaurants or at the very least chain restaurants we don’t have in Indiana, but I was craving Chick-fil-A sweet tea, and the family was kind enough to help me give in to my craving.

After dinner, we spotted a Great Clips and decided we would all take care of our scruffy hair. Well, except for my husband who doesn’t have any. The hairdressers did an excellent job except for my cut–I asked for chin length, and it is ear length. Oh, well. It will grow.

Finally, we headed to the Super Target across the parking lot and picked up everything we needed to restock our cupboards before heading back to our campground. 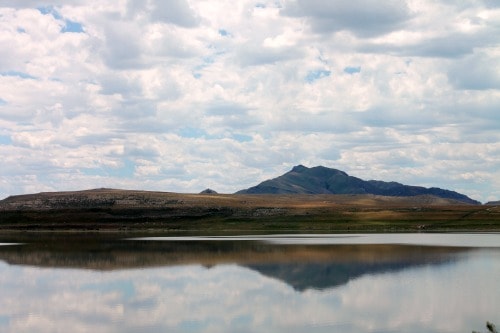 Wednesday morning my husband finished off a few more errands while I worked and then that afternoon we headed out to Antelope Island State Park.

After exploring several national parks in a row, a state park seemed small even though it does cover quite a large area of land just outside the city.

When you first enter Antelope Island State Park, you drive along a very narrow strip of land with water of the Great Salt Lake on either side of you. The water is very still and reflects the view of the nearby hills and mountains so perfectly. 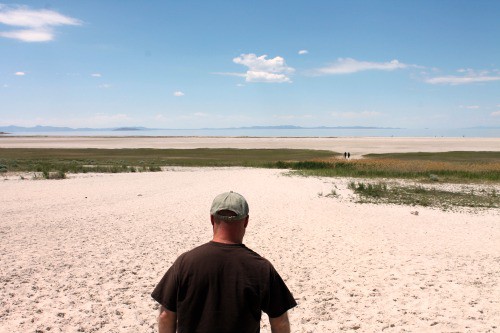 I have never been to a salt water lake before, so I wanted to go down to the water at the beach within the park to see if it was similar to the ocean water I grew up by–it isn’t at all. The water was so brown and yucky at the shore that I couldn’t even get my water loving self to put a single toe in it.

I apologized to my family when we reached the shore because I felt kind of bad that I had asked them to walk down to the water. The walk wasn’t that long; the problem was the sand was super painful. Everyone was barefoot because we thought it would be soft sand and we wanted to avoid sandy shoes. However, there were these small flat rocks mixed in the sand that were impossible to miss and really hurt the feet.

Lesson learned: salt lake water and salty ocean water are not the same and neither are their beaches. 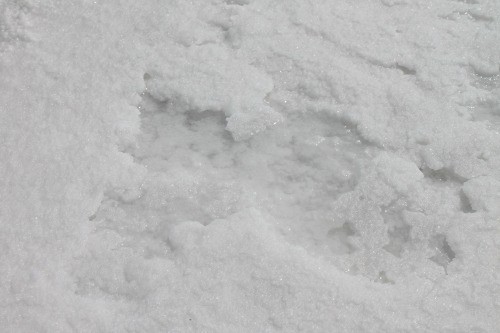 Thursday we decided to see one more salty site –the Salt Flats. They reminded me a lot of Badwater Basin that we saw while in Death Valley, although the area they cover is much larger. In fact, the Salt Flats cover over 30,000 acres of land west of the Great Salt Lake in Utah. 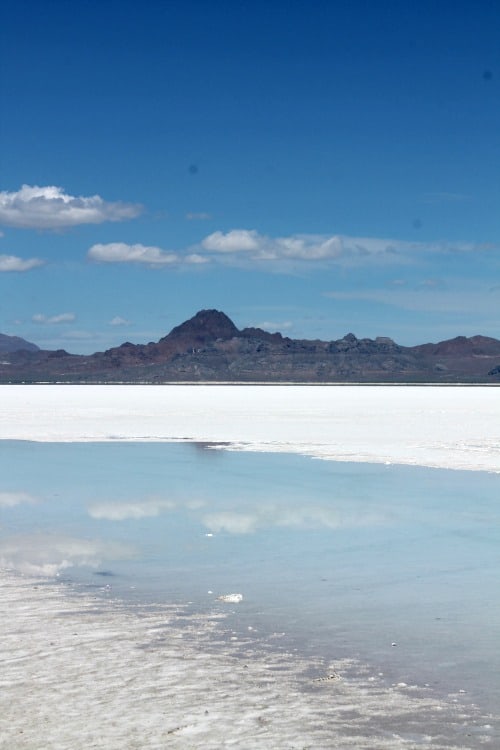 There is just something about the salt covered earth that mesmerizes me. It seems so unreal to see nothing but salt crusted earth for miles and miles. 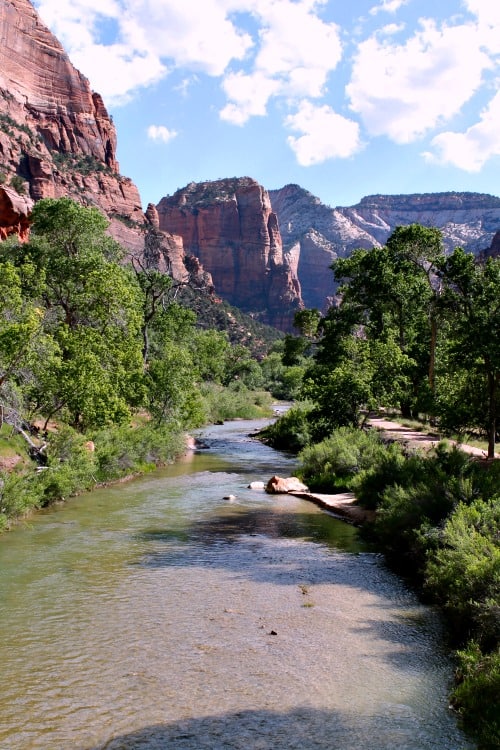 Friday we left Salt Lake City and headed for Zion National Park. We arrived mid-afternoon, so my husband and I decided to head up to the park from our campground about 20 minutes away to grab a map and ask the park rangers for advice as to what to see during our full day to explore it.

Right away we noticed that the park was much busier than any other National Park we have visited to date. You see, this weekend is Memorial Day weekend in the States–the busiest camping weekend of the year.

We decided right then and there to get a early start on Saturday. We woke the kids up at 4:45 a.m. and were on the Zion free shuttle heading to Temple of Sinawava by 6:15 a.m.

The views in Zion were incredible. I once again spent an entire day saying, “Wow!” every 5-10 minutes. 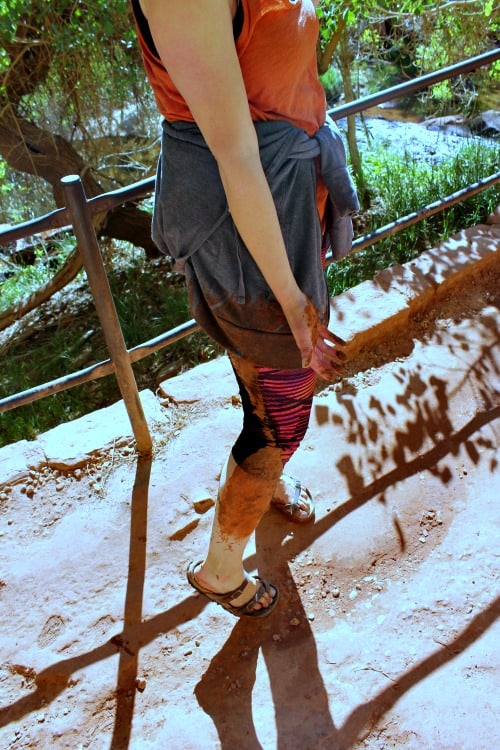 Wow wasn’t the word I said when I slipped in the mud on the Lower Emerald Pool trail, though. Although my choice words were not those containing four letters they were still pretty raw. Thank goodness for the bottle of water and my pack of travel wipes in my backpack.

I was able to get most of the mud off me with those two items, and the sun quickly dried my clothing. I don’t think my Birkenstocks will ever look quite the same though. 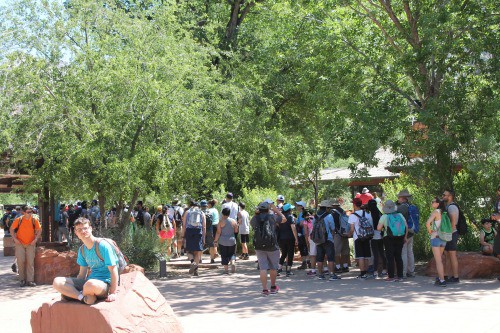 I am so glad we decided to go early!

As I type this it is currently Saturday afternoon, and my husband and I were planning to enjoy dinner in the park and an evening hike  just the two of us in honor of our 22nd wedding anniversary. But as we left the park we decided to change our plans and head to St. George for dinner instead. Thank goodness the crowds should go down a bit once the long weekend is over.