There are some days that I feel like we surely have been gone from home way longer than three weeks and then there are other days when I go, “Wow, where did the time go?”

Monday we made the best of the short amount of time we had left in St Mary’s when it wasn’t raining. We went and saw the McIntosh Sugar Hill ruins. What I loved most about the ruins was seeing how the walls were made with mostly shells. I learned later in the week at another place we visited that this type of construction is called tabby.

Oh, and printed capri-length leggings and a long t-shirt are fast becoming my favorite travel outfit of choice. I can wear them with runners when we are going to be walking miles, or with sandals, if we are going to be driving most of the day. Very versatile and very comfy.

We spent the majority of our week checking out all the local beaches in the Amelia Island area of Florida. We went to Amelia Island beach, Little Talbot Beach, The Bluffs on Big Talbot Island, and the historic American Beach.

American Beach was my favorite; miles and miles of light grey sand and incredible waves as far as the eye could see. 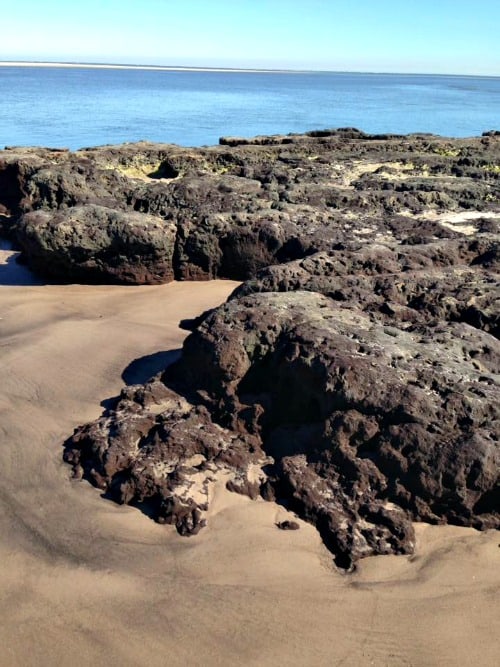 One afternoon exploring the beaches didn’t go so well though. It wasn’t the beach (we were at the Bluff’s) it was the access to it.  It appeared that storms must have eroded the trails down to the beach. Our family had to climb our way down carefully.

The day was hot, and we really should have brought water with us and worn sunscreen. I was getting a bit crabby from mild dehydration and sunburned shoulders when we reached these rocks in the picture above. In my irritable mood, I tried to take them a bit too fast, wanting to get back to the truck for water and shade. My speed was a bad idea I slipped and sliced open my ankle.

The cut isn’t too bad, but it does sting and rubs in every pair of shoes I have with me. It is a constant reminder that crabby moods get you nowhere.

We did see a few more sites than just beaches. Our favorite was Fort Clinch. The site costs $2 per person to get in, and it was another $3 per vehicle to get into the state park where it is located. 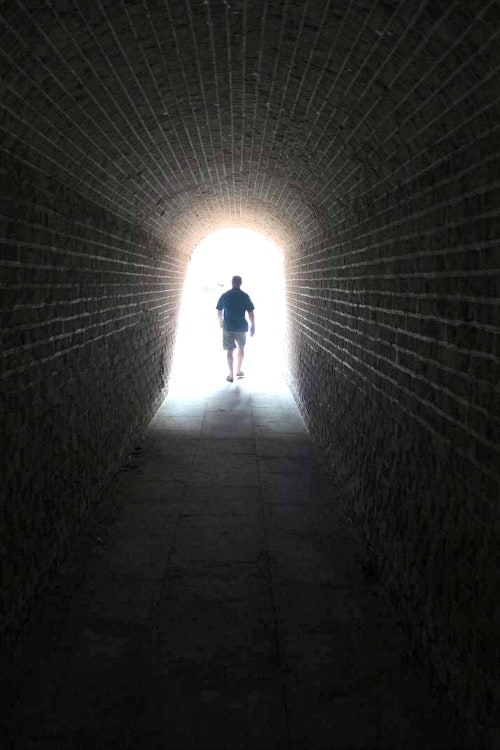 The brickwork in all the buildings and the walls around the fort was incredible. I kept thinking about how long it must have taken to build by hand.

I loved the privacy we had at our campground on Little Talbot Island. What I didn’t love so much were the bugs. People–it seriously looks like mosquitoes were trying to map out the constellations on my body! I just wanted to sit outside and read, but they were having none of that!

Which is why I squealed with joy when my husband surprised me with a small tent that I could sit in and read without getting bit.

This tent is also giving me a place to go in the early mornings when everyone else in the family is sleeping. Up until now, I would try my best to sit quietly on the couch and read or work with a headlamp while everyone continued to sleep for two more hours.

The tent allows me to do yoga, read and color in my bible, work, or read a book and not be fearful of waking anyone up.

I keep it warm with a small space heater, and my husband bought me a battery operated light that hangs from the ceiling (similar to this one, but a different brand).

I call it my introverting room. 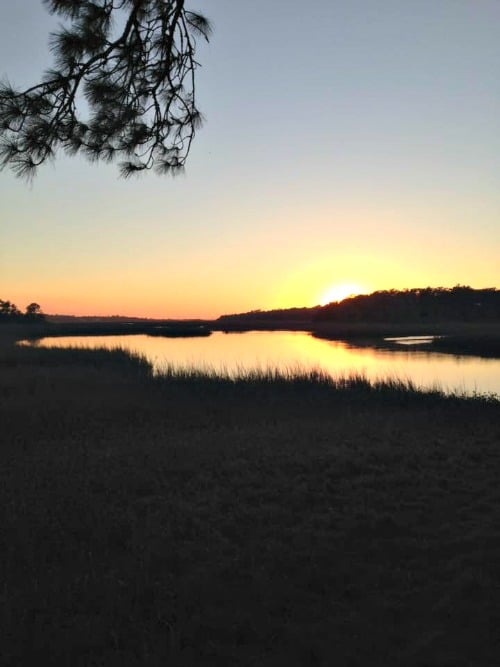 This marsh might have been one of the reasons why the campground was so buggy, but it provided some beautiful sunsets during the week.

My husband and I also caught an early morning sunrise on the beach. You can view that on Instagram. 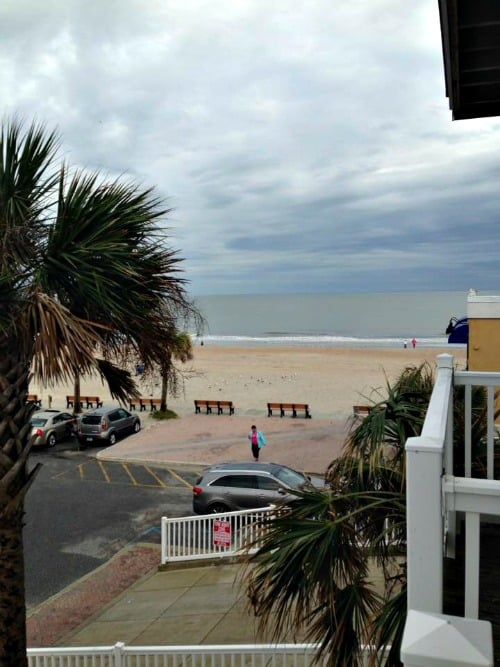 We have been under budget each week so far, so my husband and I decided to spend some of the surplus we have created on a hotel room for the two of us one night.

Remember: our eldest is almost 21 so he is more than old enough to watch his 16-year-old brother and 14-year-old sister for an evening for us (not that they need a lot of watching at their ages, but they do need an adult present for the night hours).

Our RV is just 27 feet and all one room (yep–no separate bedrooms), so I think both kids and parents enjoyed the time apart. 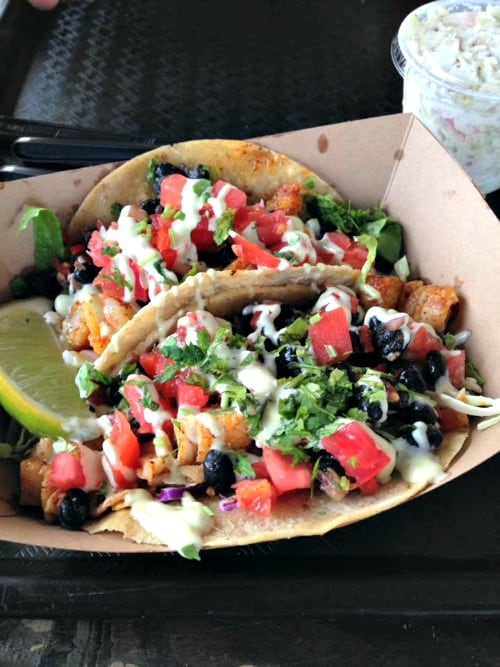 My husband and I soaked up every minute of the time we had in the hotel leaving only for dinner…and what a dinner it was.

We went to downtown Fernandina Beach to Timoti’s Seafood Shak. OH, MY! I had the best shrimp and fish tacos.

Afterwards, we couldn’t resist going into the nearby Nana Teresa’s Cake Shop and picking up a HUGE cupcake each. We took them back with us and enjoyed them later in the evening.

The campsite did not have internet or good cell reception, so I spent 2 or 3 mornings during the week at a Starbucks trying to keep caught up with work.

I am happy to report that some of that work included the final touches on my book! Melinda Martin is doing a fantastic job designing the book for me.  It should be available to purchase on Amazon in the next few weeks or so (update it is now for sale in both paperback and Kindle format.) I can’t believe it is finally this close to being done.