It was tough to narrow down the pictures to just ten that best represent what we saw this week. Mostly because during the first half of the week we saw as many as ten different sites in one day.

Ordinarily, we go out and explore just one place each day–two usually top. But being in my childhood region of the Comox Valley made me want to see so much more. I wanted to see if my childhood homes still looked the same, if my schools had changed, if my favorite beaches were still as beautiful as I remembered, and I wanted to share every spot with my family.

Luckily most of the parks and beaches were tiny and close together, so it didn’t take long to see several of them each day. By the end of the three days, I had seen all I wanted to see in the area, and we still had several hours a day of down time in the RV.

Now, let’s dig into what we got up to this week. 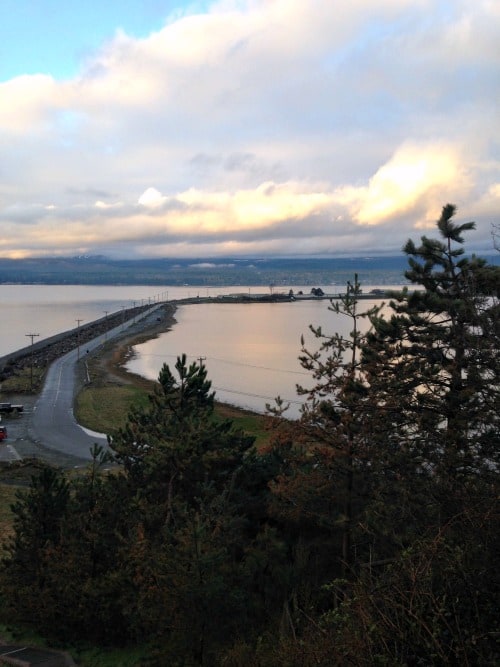 Monday morning the sun broke through the clouds, and I knew exactly what place I wanted to show my family first–Goose Spit. Not actual goose spit (just in case you were confused), but a beach called Goose Spit.

That is it there in the picture above. It is essentially a small strip of land with a beach on each side. The beach on the outside of the piece of land was my favorite beach to swim at as a child. The water there gets deep fast.

I ended up going out to the Goose Spit several times during our three full days in the Comox Valley as it has an excellent running path down to it.

Another place I wanted to show the family was Condensory Bridge. You see I always talk about how I was a wee bit of a daredevil at times as a teenager and how I once jumped off a bridge–this would be the one. I promise the water is much deeper than it looks when you get out to the middle of the river and my friends, and I got someone to check its depth before we jumped.

Now there are signs on either side of the bridge that says, “Do not jump from bridge,” so I guess my friends and I were not the only ones to jump off this bridge in the summer time.  I swear those signs were not there all those years ago or I would never have done it–I said I was a wee bit of a daredevil, not a rebel. And I also want to let you know that my 43-year-old self-thinks that my 16-year-old self-lacked common sense. No way would I consider jumping off it now nor would I let my kids! 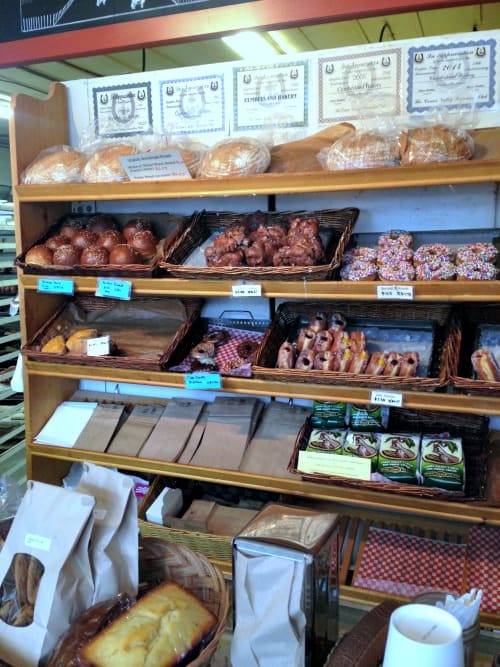 I also took my family to many a bakery in the area including the Cumberland Village Bakery pictured above. Freshly made baked goods are the number one food I miss in Indiana. Perhaps other Indiana towns have good bakeries, but ours does not, although it does have a good fresh doughnut shop.

It is probably better for my figure that they don’t though as I think I put on several pounds while on Vancouver Island due to  DAILY indulging in one item from a local bakery. Hopefully, my goal of training for a fall half marathon will help me take those off once we return home. 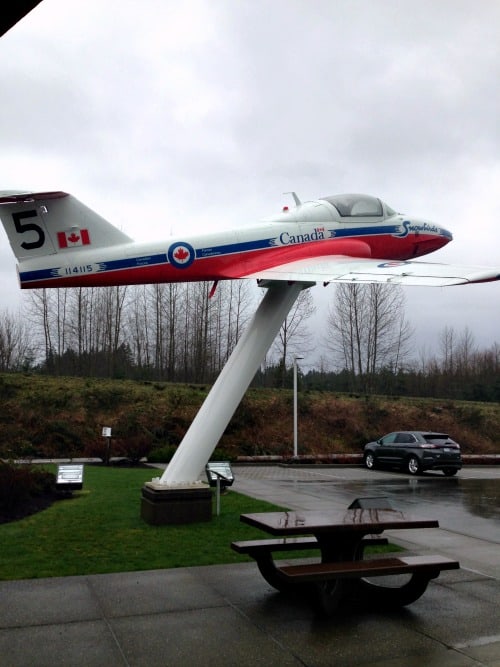 Something I had completely forgotten about my hometown is that the Snowbirds practice there. Several times during the week we were treated to an air show. I tried to get a picture of them in formation in the air but they move quick so in every shot they are either blurry or look like tiny birds.

When I saw this one mounted in front of the local tourist information center, I asked my husband to stop so I could take a picture to remember them by.

Later in the week, we went to the Comox Air Force Museum, and in there we were able to read up on all sorts of interesting facts about the history of the Snowbirds in Canada. The museum was by donation and is well worth the stop if you ever happen to visit the Comox Valley area. 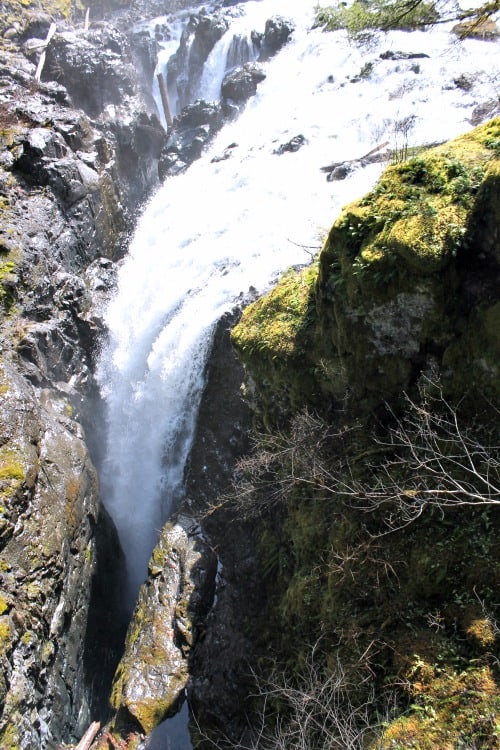 On the last full day in the Comox Valley, I decided I wanted to see some sites that I had never been to see during my 18 years of growing up on Vancouver Island. So we headed to Englishman Falls (that is the upper fall pictured above) as well as Little Qualicum Falls and wouldn’t you know it when I asked the children what was their favorite site from our three days in the area all three said the falls.

I LOVED them too! They were especially lovely because in April they are at their height as far as water flow goes. The roar of the rushing water was incredible! 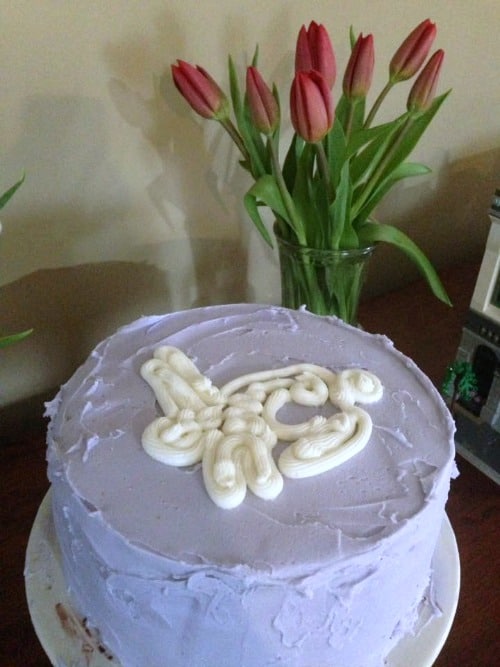 Wednesday we pulled out of Comox Valley and headed back to Nanaimo to spend one more night with my sister and her family before leaving Vancouver Island for Vancouver.

She treated us to an early Easter dinner complete with a three layer Easter cake full of chocolate eggs—yum!

Around 9:00 a.m. Thursday morning we made our way down to Departure Bay in Nanaimo to catch the ferry to Horseshoe Bay. We were planning on catching the 10:30 ferry, but we got to drive right onto the 9:30 one since they had room still.

This gained us a bit more time in Vancouver. We decided to use it to treat the kids to dinner in Gastown at the Old Spaghetti Factory. One of our three children loves Italian, and we figured we had allowed the burger loving child to try out several burger chains, so it was only fair to let the Italian loving child try out a new to them Italian restaurant in a historical area of Vancouver. 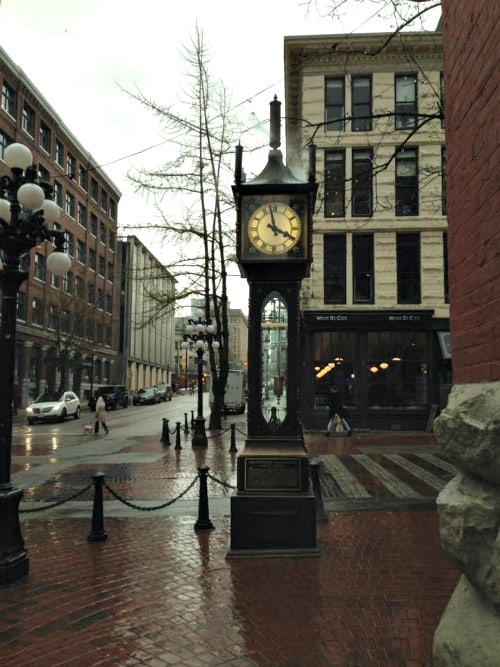 This clock, along with several other sites we saw this week, seemed much smaller than I remembered–but I guess that is because I am much bigger than when I last saw them. 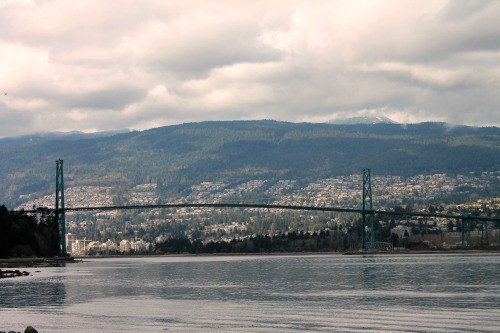 Friday we decided to let the kids sleep in and then enjoy an early lunch in the RV before heading to the Stanley Park Aquarium. That was probably a mistake as it was Good Friday, so it seemed like half of Vancouver had decided to do exactly what we did.

However, the Stanley Park Seawall walk was not as busy and allowed our family to enjoy the views of Vancouver from afar.

Pictured above is the Lions Gate Bridge. I remember as a child thinking this bridge was HUGE. Now that I have seen the Golden Gate Bridge it seems to have shrunk. But as I said above a lot of what I saw this week appears to have done the same thing so I guess seeing things through adult eyes shrinks things I have only seen with child’s eyes up until now. 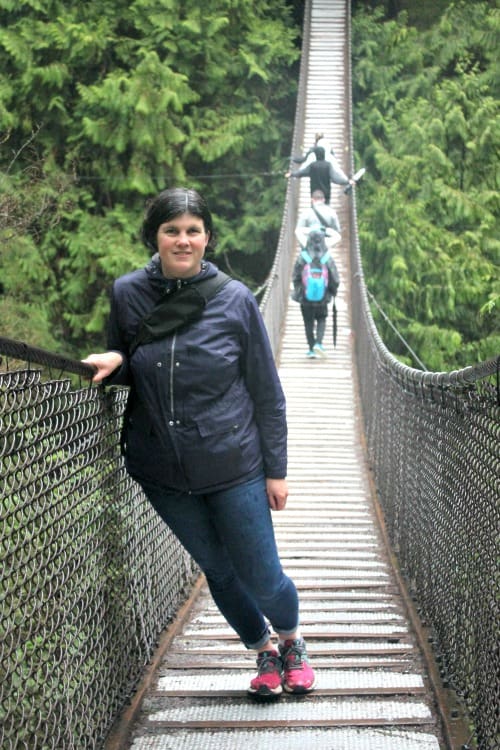 And this morning (Saturday) we finished off our week of exploring with a trip to Lynn Valley Suspension Bridge and trail to Twin Falls.

This suspension bridge is still 100% free to visit unlike the Capilano Suspension Bridge in the Vancouver area, which charges over $30 per person for you to walk over it. It is true that the Lynn Valley bridge is smaller, but with five people it would have cost us over $170 just to walk the Capilano one, and we all felt that a few more feet of bridge wouldn’t have changed the experience enough to make it worth that price.

(psst… I am loving the Canvas sling bag you see me wearing in the picture above; it fits my cannon rebel perfectly as well as my iPhone 5C, a bottle of water, my wallet and any other day hiking essentials I need)

Sunday we are driving to the Okanagan Valley in the interior of British Columbia where my husband’s family lives. So by the time you read this Monday morning, we will be there.