What a week! I got to go somewhere this week that I honestly thought I would never get to. I lived on Vancouver Island the first 18 years of my life and never got there, so I figured my chances of ever seeing it now that we live in Indiana were slim to none.  But now I have, and I wish I hadn’t waited this long.

You will find out what area I am talking about in just a moment, for now, let’s jump into what we got up to this week starting at the beginning. 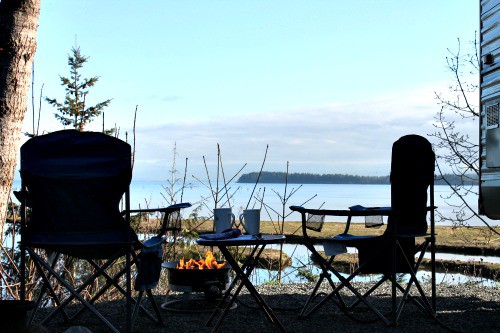 Sunday we arrived at Living Forest Campground on the south side of Nanaimo right around lunch time.

I could not believe the view we got without having to take a single step out of our campsite. From all but one window of our RV, we could see the water.

Two mornings we got the propane fire pit (ours is similar to this one) going and drank our coffee and tea while enjoying the view. 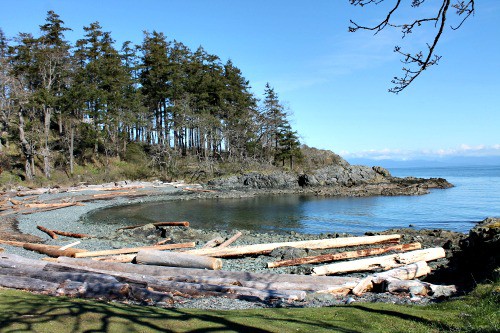 Each day we were in Nanaimo we would head over to my sister’s in the morning to explore the area with her. Then after lunch, we headed back to the campground for a while so I could get some work done. At dinner time we would head back to my sister’s to share a meal and chat some more. It was great to catch up with her face to face after so many years apart.

The first day she took us for a walk to Pipers Lagoon. The park contained several different beach areas. 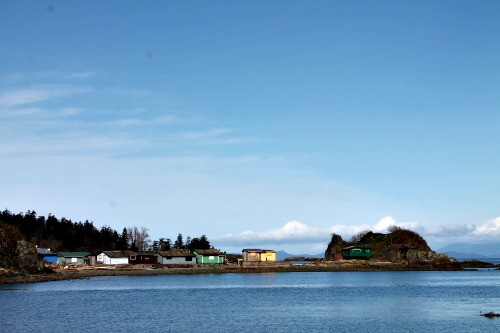 I think my favorite part of the park though was seeing the little shacks located on an island not too far from the park. At one time families lived in these shacks but now they are used as summer hangouts. There is no power or sewer to these little shacks so they are simply places to row out to and enjoy a BBQ with the family while enjoying the view.

I liked the wide variety of colors they added to the surrounding sea of blue. 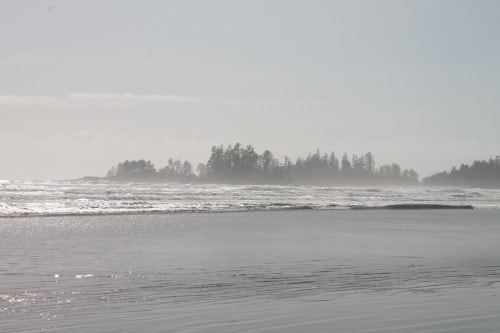 Wednesday morning just my sister and I went out for breakfast, and then I met up with the family, and we pulled out for the Tofino area.

Tofino is on the utmost western side of Vancouver Island–a place where I have heard others rave about, but never been.

But finally, that changed! At the age of 43, I finally made it to a place that was just a three-hour drive from where I spent the first 18 years of my life.

After setting up our RV at our campsite, we realized that there were still several hours of daylight left and the weather was sunny. We decided to use the gift of time and sun to hit a few beaches before nightfall.

First, we went to Long Beach. The roar of the Pacific waves was incredible there. 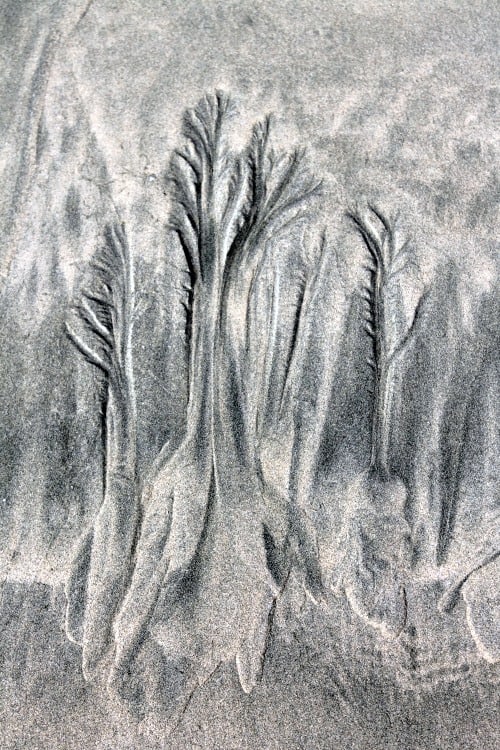 One thing I noticed right away at Long Beach was the “drawings” the water makes in the sand. To me, it looks like trees painted by the ocean. Markings like these were up and down almost all the Tofino area beaches we visited. 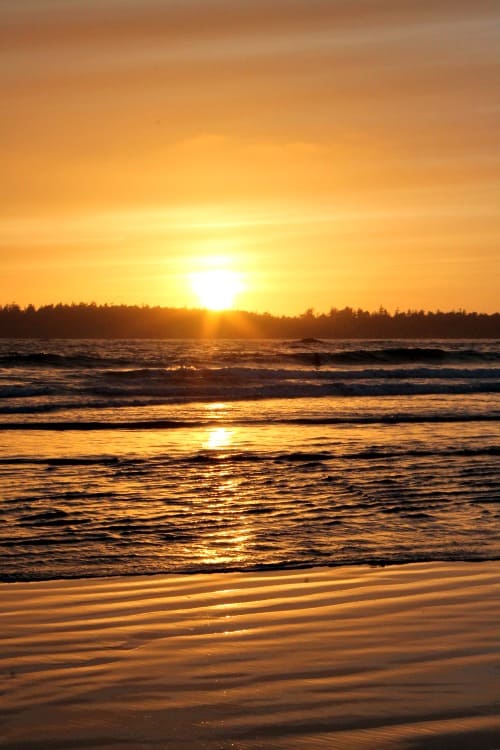 As we saw the sun heading down in the sky, we made our way back to Mackenzie Beach, which was just a few minutes walk from our campsite.

There we waited for the sun to descend behind the trees. We got there a bit too early, so the whole process took over an hour. I guess we haven’t been paying attention to just what time the sun disappears lately. Now we know it is currently right around 8:00 pm PST. 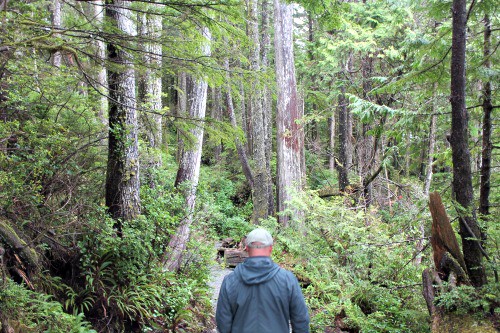 It started to rain during our first night in the area, but it stopped that morning and was cloudy with the odd, mist-like rain now and then. However, it started raining again after the sunset on our first full day in the area, and it never did stop raining completely for the rest of our visit.

Considering the area gets 3.3 meters of rain annually I think we were pretty blessed with the sun we did get during our visit especially since the saying on Vancouver Island is “April showers bring May flowers”–in other words, April is known to be a rainy month around these parts.

Knowing rain was usual this time of year we simply suited up in raincoats and did our best to enjoy our two days in the area whether we were given rain or sun. 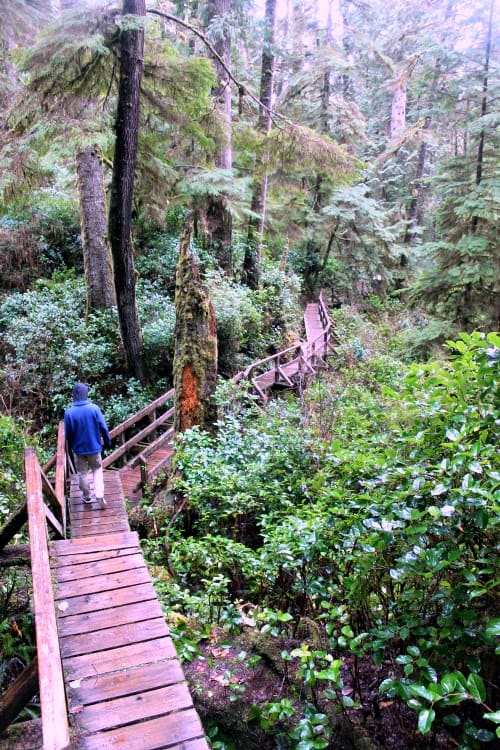 We continued with that attitude during the two full days were in the Tofino area and enjoyed many fabulous beaches and beautiful lush green rain forests.

Two forest trails we went on had these wooden paths to follow. They were very picturesque, but slippery–especially in all the rain we got during the second full day of our trip. 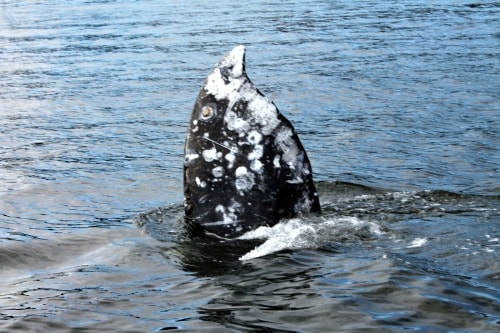 A major highlight of our time in Tofino area for two of our children was a 2 1/2 hour trip on a whale watching boat. My husband and I crunched the numbers the first morning we were in the area and realized we had enough money in the budget to offer all three children the chance to go out and see the whales.

I have seen many a whale as a child, and my husband and I both get motion sickness easily, so we decided not to go, but we wanted our kids to experience it if they wanted to.

Our child that does experience motion sickness did turn us down, even though we offered them non-drowsy anti-nausea medication. We asked why and they said the motion sickness wasn’t the problem, they simply were not that interested in seeing a whale–and we believed them since that one child has never been as into animals as our other two children.

The two children that did go came back with glowing faces and stories to share of the grey whales they saw on their outing. The third child never did seem disappointed about not going which confirmed that whale watching wasn’t a good fit for that one. But when we do find an adventure that is, there is a ticket with their name on it.

(Oh, and although it had been lightly raining all day, during the 2 1/2 hours of their trip, not a drop of rain fell! In fact, the sun came out–that was a major blessing) 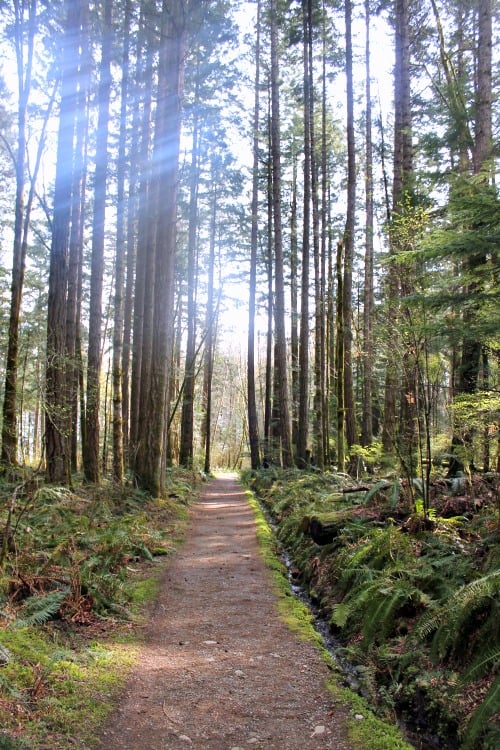 Saturday morning we packed up in Tofino and arrived in Comox by early afternoon. Comox is just up the hill from my hometown of Courtenay. Well, actually I grew up in nearby Tsolum, so perhaps I should just say we are currently exploring the Comox Valley area.

Today we hit Seal Bay Park and explored its wooded trail (picture above) and nearby beach. Then we worked our way slowly up the coastline of Vancouver Island visiting beach after beach until we hit Campbell River.

On our travels back I showed the kids the home I grew up in. At least I think it was the home. The street address was right, but sadly the home had been renovated so extensively that I barely recognized it. The only thing that looked familiar was a shed in the yard.

Oh, well. In all honesty, the home did have an odd layout, and the upstairs floor is now way more usable thanks to the renovations. Guys, the front door isn’t even in the same place! I would have loved to see inside, but that would have been awkward–“Hey, I know you don’t know me, but my parents built this house. Will you let me and my family of five quickly tour your home that now looks nothing like it once did?”–Yeah. Only a rare person is going to say yes to that.