We have now officially been on the road for an entire month. Some days the trip seems to be flying by and other days it feels like it is crawling.

Some days I never want it to end and other days I miss taking a shower without shower shoes so bad that I want to go home right now! I also miss my toilet. YES–my toilet. My husband really isn’t into cleaning out a sewer tank and I don’t blame him so except for during the dark of night we use the facilities at the campsite.  In some places we have had both sewer and water, but even then we tend to use the restrooms for um…solids…and for showers (our shower stall is very tiny, you would have to be less than 5 feet to have the shower head hit where it is supposed too).

Okay, enough talk about what I miss and what I love–time to show you some pictures of our week. 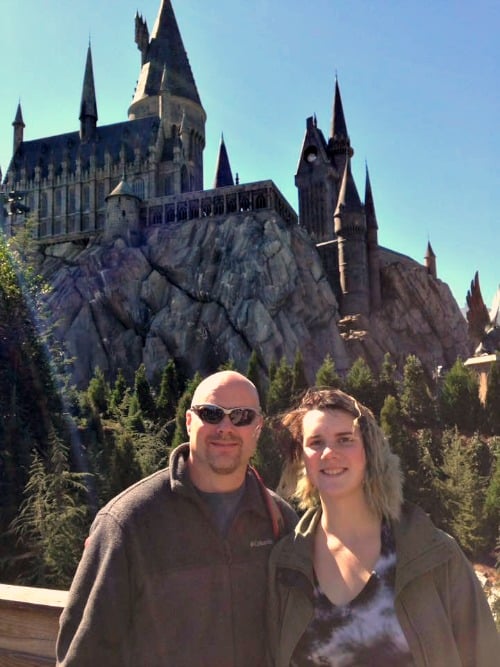 We started off our week in Orlando. We stayed at a campground about 45 minutes away from the theme parks we wanted to visit.

The campground was NOT my cup of tea. It was crowded. You really had more of a parking space than a campsite. Hardly any trees and no privacy. The only good I can say about it was the restrooms were clean and new and the staff was friendly.

It really didn’t matter that the campsite wasn’t our style though as we were really hardly ever there. We left by 8 or 9 all three days we were there and got home anywhere between 4:00 p.m. to as late as 10:00 p.m.

We spent two of those days at Universal Studios and the other day at the Magical Kingdom in Disney World. Yep! It was a very expensive week. It was probably what will be our most expensive week of the entire trip.

This week was 100% for our kids. That one in the picture above with her dad talks about Harry Potter ALL. THE. TIME.

Her two siblings like the Harry Potter books/movies too, and so does my husband. I enjoyed watching the movies when they came out, but I don’t watch them over and over like the rest of the family. Still I really LOVED The Wizarding World of Harry Potter. There was so much to look at. Oh, and if you go the frozen butter beer is way better than the regular. 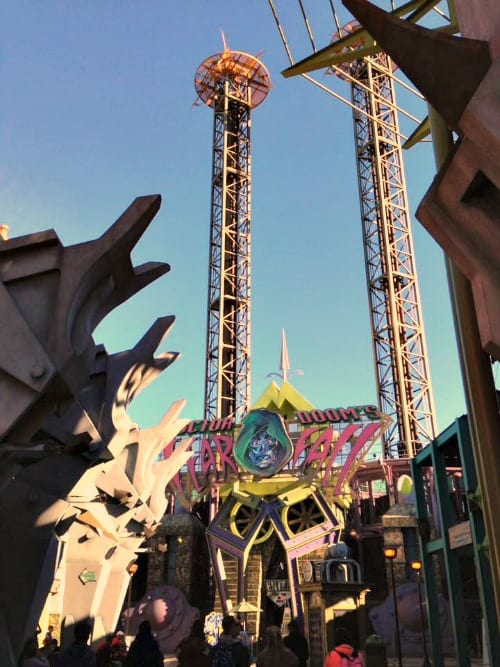 We spent the first half of the first day in The Wizarding World of Harry Potter and a good portion of the next day too. The rest of the time my teenagers and full-grown son rode the rides in the other areas while my husband and I read books on our kindles.

You see, this ride below is TOTALLY my kids’ speed whereas the ride above is more my speed. 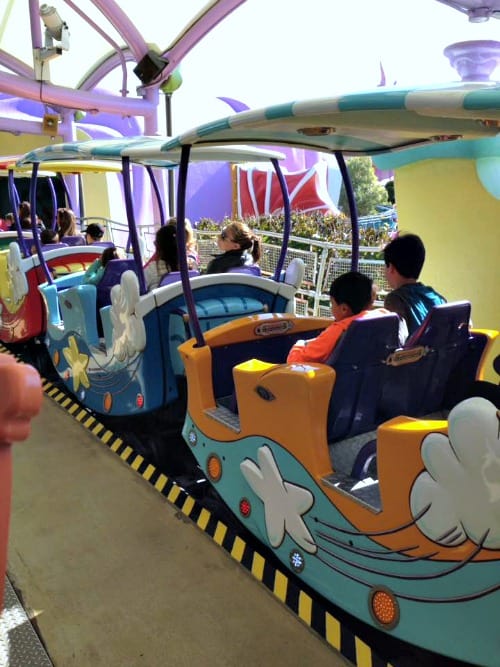 Yep my favorite area of the entire park (after the Wizarding World of Harry Potter) was the Dr. Seuss-themed area. I rode all the rides but one in this area–that one spun you around and around which would have made me lose my breakfast.

It was also in this area where the kids and I discovered what just might be our favorite doughnut of all time–at least size-wise. 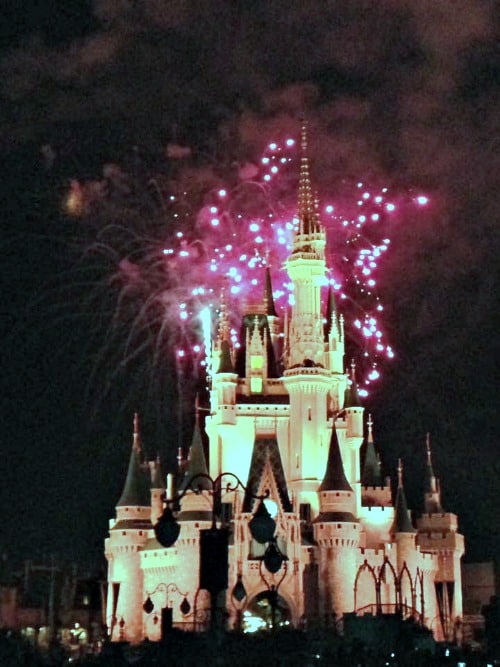 On our third and final day in the Orlando area we hit the Magic Kingdom. I have to be honest, I found it much less magical this time than I did on our first trip five years ago.

Even though we made that trip the same time of year as we did this one, the lines this time were horrible. The park was so packed that this introvert felt like she didn’t get her preferred 5 foot buffer between herself and crowds all day long.

However, the light show followed by the fireworks at the end of the day made up for the crowds. I told my family on the ride home I so wish they had a reduced ticket that could get you in just for the last hour of the day when they do the light show and fireworks. 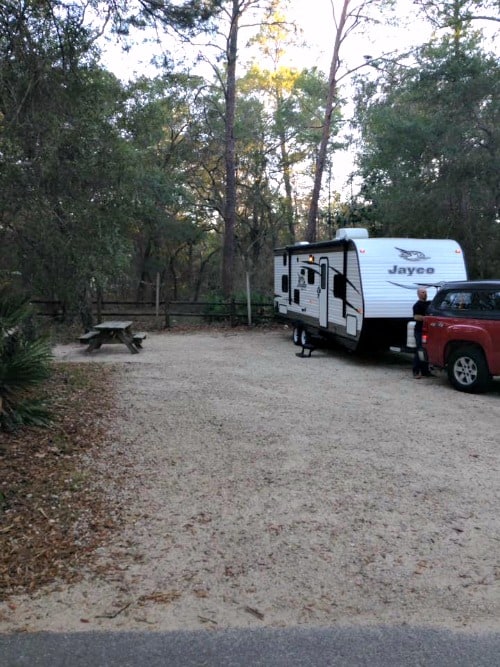 We pulled out of the Orlando area early Thursday morning and headed towards the campground I had been worried about since we booked it back in August.

You see, the campground was just $16 a night when most we booked for the trip were right around $50.

When we pulled into Fred Gannon Rocky Bayou State Park I breathed a HUGE sigh of relief. This place is amazing.

The sites are huge and very private and we are lucky enough to have one with a water view. There are trails nearby that I have run on twice already.

The bathrooms are a bit outdated (green fake marble) but they are clean and in good repair. 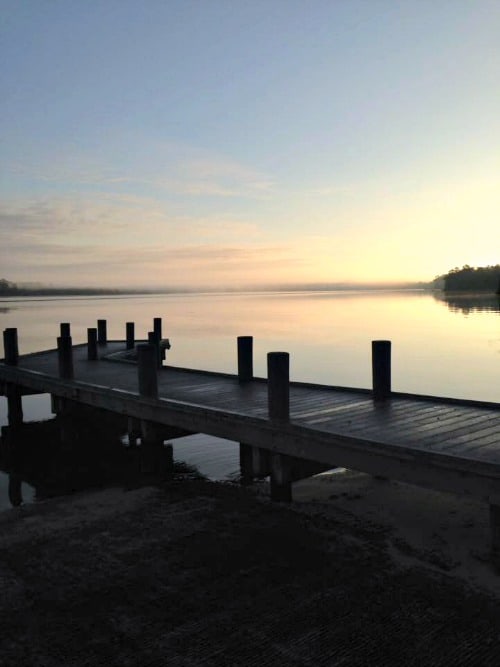 This is by far the nicest campground we have camped at so far with Stone Mountain in Georgia as a close second.

It is also very close to Panera bread where I have been working at all week, as well as any other stores you might need and the traffic is light in the area.

I so want to lengthen our stay here, but we need to move on out of here by midweek so that we reach our relatives and friends in Canada when we told them we would.

Five and a half months seems like so long but when you start mapping it out, nights and days get booked up fast. 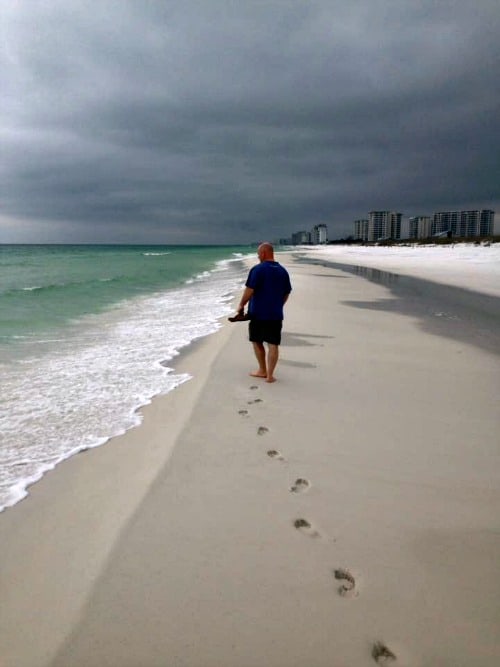 Another benefit of staying at Fred Gannon State Park is that we got in free to Henderson Beach State Park. There was a $4 each way bridge toll, but the beauty of the beach made it worth it.

The sand was so white and soft. The ocean was intense shades of blue and green. The waves rushed in creating foamy white caps.

I could have spent hours soaking it all in despite the fact that we went on a somewhat stormy afternoon and it was raining off and on.

Saturday we left Niceville and went to visit the Pensacola area about an hour away. We pulled out of the campsite at 9:00 a.m. and didn’t get home until 9:00 p.m.

The long day was full of beauty and history. We dropped off our boys to spend the day with a friend of theirs that goes to college in the area. We spent the day with just our daughter and boy was that quiet after weeks of taking all three everywhere.

Our first stop was the Pensacola light house. The museum area was free but their is a $6 admission to climb the lighthouse. I almost stayed on the ground as I am not a big fan of small spaces or heights and the lighthouse climb has both, but I am determined to jump out of my comfort zone on this trip when necessary so I can truly soak up the experience. 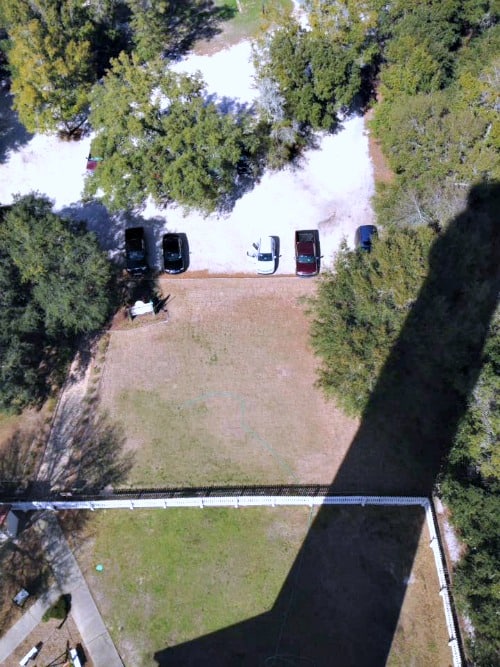 I am so proud of myself; I made it to the top with very little anxiety and I was able to go out on the ledge and grab a couple of pictures including this one that gives you an idea of how high up we climbed.

I am writing this about 24 hours later and I am feeling that climb in my calves and, um…backside.

After the lighthouse we took in the Aviation Museum. I was shocked to find out it was free. We also went down the road to see Fort Barrancas.

All three sites are worth seeing. 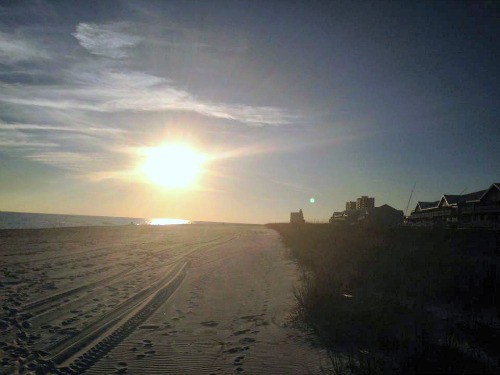 Our last stop before heading out to dinner and then home was to Gulf Shores State park and on the way through we stopped at Pensacola beach to enjoy the beginning of the sunset.

Once again we were greeted with white sandy beaches and brilliant blue water.

So our week started out full of crowds and excitement and ended with calm and miles and miles of beaches.

Week Four Update: Orlando and Niceville (you are here)