If there is one thing I have learned in 19 years as a parent it is that schedules, routines, and systems all change with the seasons.

One such system that changes as the children age is chores. How much to pay for a chore. How many chores each child has. What the child is expected to do with their money and so forth.

I have known for a while now that our current system of a set chore chart for each child and a set allowance wasn’t working anymore.

My children are all older now and no longer home all day at the same time. My oldest just got his first job. My middle child attends a christian private school 2 days a week. My daughter is a social butterfly visiting with her friends when ever she gets the chance. 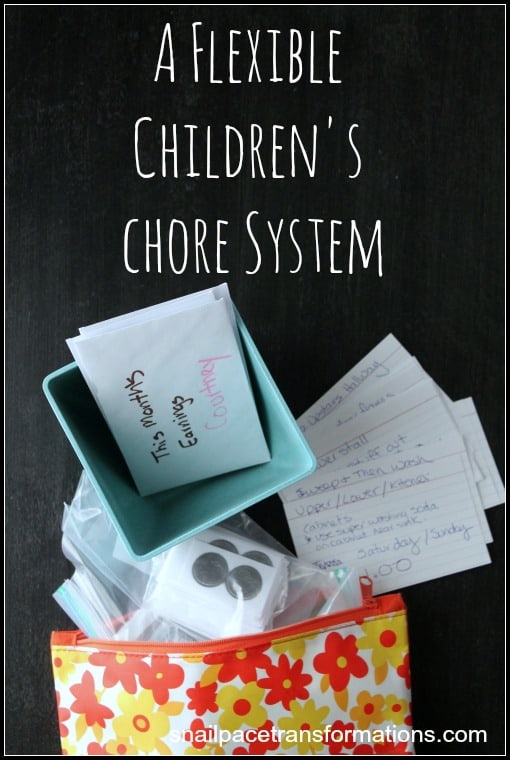 All the activities mean that sometimes during the day only one child is home. Other times no children are at home. Problem is chores need to be done whether the kids are home or not and that left my husband and I or another child picking up the slack for the child/children not home when the dishes needed doing or the laundry needed sorting. Which means we were doing chores other people were getting paid to do.

So in a moment of pure parent frustration born out of a child who was whining about sorting laundry because it wasn’t her chore, our chore system got  long over due update. One that I hope will last us through these final years as the children leave the nest (our youngest is now 12).

I made this system up in one afternoon, and based it on the sugar bowl system we use to use when the children were much younger and had been using still for irregular chores. This system is flexible. The chores are assigned on a day by day basis meaning those that are home get paid to do chores and those that are not home that day, miss out on earning money. 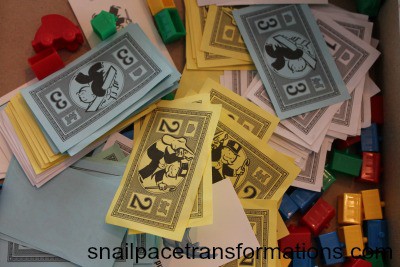 I am all about simple, so I knew we needed a simple way to keep track of work done as it was done so that I knew how much I owed them at the end of the month.

I knew the simplest thing to do would be to switch to an automatic pay system. As in you do the chore you get paid instantly. However, I like making payment for chores as close to real life as possible. I don’t know about you but I know my husband doesn’t get cash at the end of each work day.

I also prefer paying my children in a lump sum at the end of the month because I find it easier to teach them how to tithe and save for bigger purchases. It is possible to take the .50 cents you just earned from emptying the dish washer and put .05 cents aside for tithe , save .30 cents and put .15 cents in your spending but time consuming. My children do several chores a day and I didn’t want that much change in the house at one time.

Which is where the picture of the Junior Monopoly board game comes into play.  I wanted the problem fixed right now! I wasn’t about to run to the store and buy fake money. Nor did I want to make up a bunch of paper slips like last time, since the kids earn a lot more chore money now then they use to and writing all those slips out would cramp any hand. 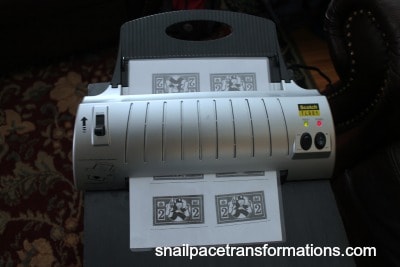 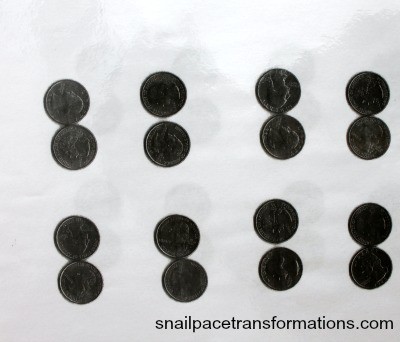 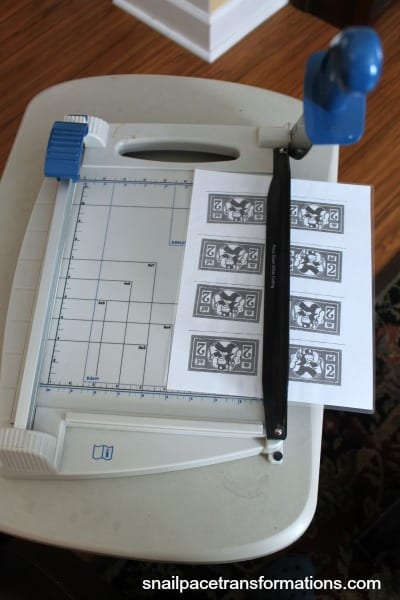 I then cut the laminated sheets of money in half with our large full sized paper cutter. 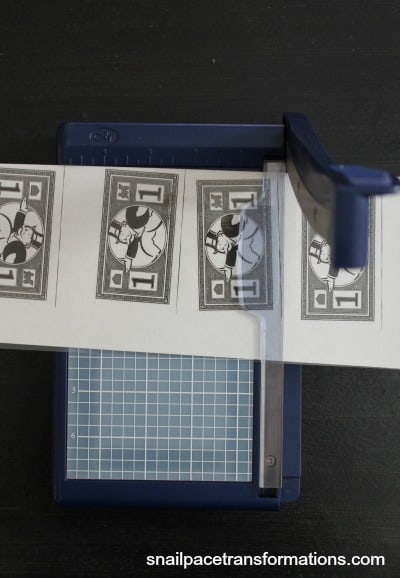 I then used my smaller creative memories paper cutter to cut out the rest of the money. 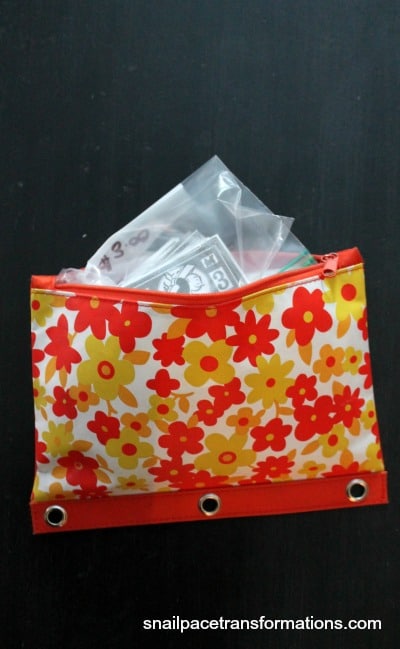 I put all the money slips into separate bags and placed them all in a zippered pencil case.

The rule is each child is to report to mom or dad when their chore is done and ready for inspection. If upon inspection a parent sees something that isn’t done right the child must correct it without whining. If you whine, you don’t get paid.

Once the chore is done right the child gets their pay slip which they put in their pay envelopes. 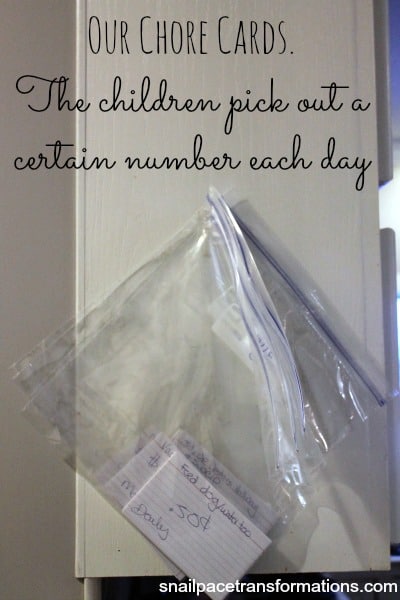 For the chore cards I didn’t get as fancy as I did with the money slips. I used simple index cards and wrote what the chore was across the top. Then below I wrote any further instructions (such as cleaning toilet means cleaning around base, both sides of seat and the bowl) .  I then wrote in the price. 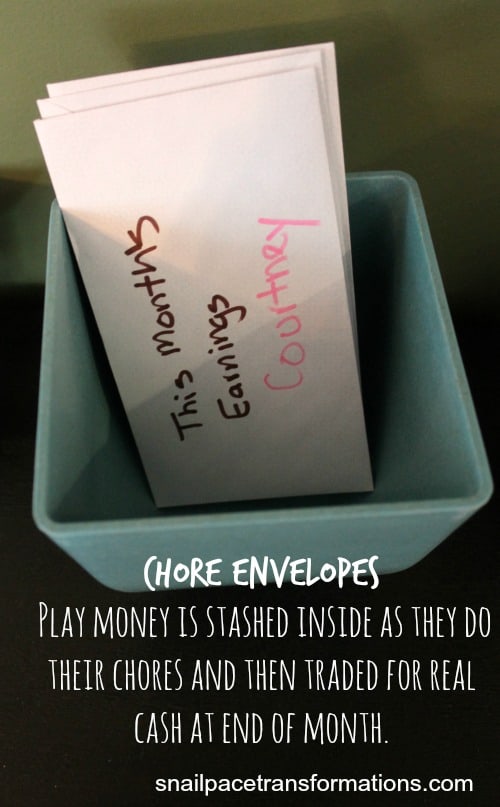 To keep the pay slips all in one place until the end of the month when my children get their pay day, I wrote each child’s name on an envelope and placed it in an empty container.

What chore system do you currently use at your house? Email with the feel of snail mail. A peek into my life, a few deals so good I just have to share, and links to all of Snail Pace Transformations latest posts!