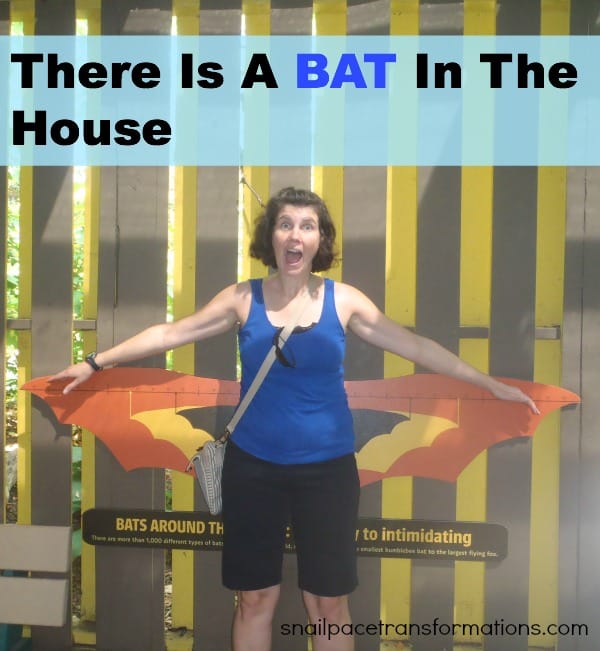 I interrupt the series From New Town to Hometown: Creating Friendships & Community to bring you a silly story that happened during our first year of settling in.

Shortly after moving to Indiana, as in within 24 hours of arriving, we started the process of buying a 100 year old home. My husband and I have always loved old heritage homes but never could afford one in the area we lived. Our new hometown is full of reasonably priced old homes in varying conditions. We settled on a livable one with a need of a bit of love.

What I soon learned about old homes is that the huge attics they often have attract my most feared winged creature, BATS. To say I hate bats would be an understatement. I know they eat millions of insects, I have three children who tell me this daily. I just don’t like the way they flutter and no matter what any one says I swear they want in my hair.

When we bought our home I saw no signs of Bats in the attic but months later I soon learned we did indeed have them. My husband was working nights that first year after our move. I had kissed him goodbye and sent him on his way and started the bedtime ritual with three children, neglecting to notice that the attic door was open a crack. By 2 am,  2 of those 3 children were sleeping in my bed and I had already been woken up twice by those same two. Pretty much an average night until while nursing my youngest I saw out of the corner of my eye something swooping from corner to corner of the room.

I immediately dove under the covers. I took a few deep breaths got brave and then peaked out. Yep, it was indeed a bat. In my panic I formulated a quick plan. Scoop up baby and toddler, keep all 3 under the king size comforter, run out of room, shut door. All worked well and I decided to try and get some sleep in the toddler’s room with the 2 kids in a single bed, however fear would not let me.

I started at the ceiling for about an hour…..okay it was 20 minutes or perhaps just 5 but it felt like an hour. I knew there was no way I was sleeping in a home with a bat locked up in one room. So I called the best exterminator I knew, my husband.

The hospital front desk at the ER was able to track him down for me in a few minutes. He answered the phone with a concerned  “honey are you okay it is late” I blurted out at lightening speed “no I am not okay there is a bat in our room and I want it gone now”. Now my husband was an ER nurse when this happened so he could have pointed out all the other larger emergencies he was currently seeing to but instead he came to my rescue (what can I say except for I married a great man).

Within minutes (the hospital was across the street from us) my man burst through the door marched up the stairs to our bedroom and chased that bat out the window, all while I remained in another bedroom with the door locked and a blanket over my head.