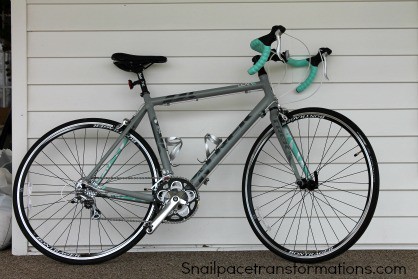 My new racing bike. Found at an incredible discount price.

I have wanted a racing bike  since I started training for my first sprint triathlon  over 2 years ago. I was so excited to finally get one until……I got back from test driving it and found my husband talking to the store owner about switching out the standard pedals with straps that racing bikes come with for egg beater pedals. 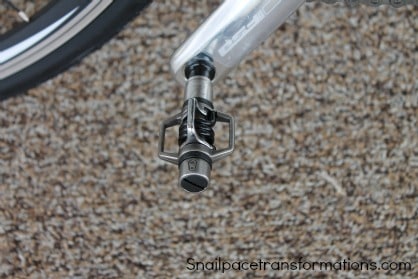 This would be an egg beater bike pedal

He won…..I left the store with egg beater pedals, and shoes for them.

Then began a month long struggle of persistence. I had to force my snail pacing self to take the bike out at least 30 minutes each week when weather permitted to get use to the pedals.

I came home most days discouraged from my bike rides. I seemed to be able to get one foot down but not the other. You see I was pigeon toed as a child and that particular foot just could not seem to get the movement of clipping and unclipping down. 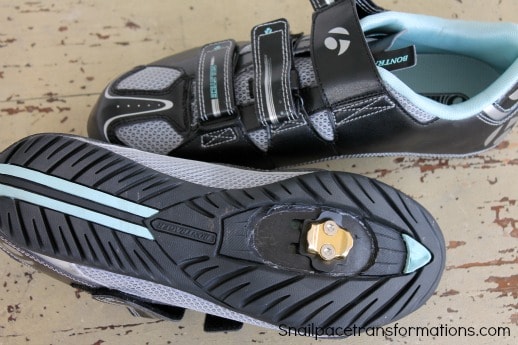 That gold thing on the bottom of the shoe is a clip, that fits into the slots in the egg beater pedals causing you to be locked into your pedal.

My husband was trying to be encouraging, but really he was adding to my feeling of defeat until…the night of the explosion.

That night he kept going on and on about how “he didn’t see why it was such a big deal” and I kept going on and on about how it was “a big deal”  until I exploded….”if you don’t think it is such a big deal then you go out and give it a shot”I yelled, and so my husband did. He road my mint green women’s racing bike complete with flower decals and he came back and said “truly honey it is not that hard”.

Which is when I burst into tears. All my life I have been that one…the one in the classroom that doesn’t seem to get it and so is slowing down the whole class…..the college student who has to hit the books three times as long as her friends so that she can get a B while they get the A’s …the full grown adult who can’t seem to conquer riding a bike with egg beaters.

Seeing the tears and realizing perhaps his approach to encouraging was not working my hubby said “but honey, because of your struggle once you do get something….it is amazing….you won’t quit until you become an expert…your drive is unstoppable”.

He finally said something I found encouraging…I rarely quit….until I get it right.

My mom use to tell me over and over when I would come home crying because of an assignment I just could not seem to understand, “Victoria, remember the little train engine who said I think I can…I think I can… and then Victoria he did… girl you just got to believe you can”.

Some days I get so frustrated with NOT GETTING IT that I have to step back and remember, If I think I can…I will. 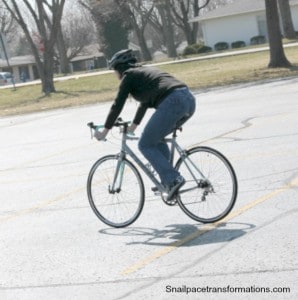 My first time out on the bike I went to an empty school parking lot and just rode around and around, clipping and unclipping my feet.

I am still a bit anxious at stop signs but each time I head out the anxiety lessens as my feet unclip faster than they did the time before. I have learned to envision my pigeon toe foot twisting in and out of the clip and it works. I now know the proper movement the muscle must make to clip in and out and each time I head out I have to concentrate less and less on making that lazy foot do the movement and find it is finally starting to do it on its own without me envisioning it.

I will admit it I would have like to do things in my snail pacing style instead of my husbands  rip the band-aid off quick style but in a way I am glad he forced me into trying his style. I am doing a sprint triathlon in the fall and it will be a great feeling for this always the last one to get it…to have gotten it. 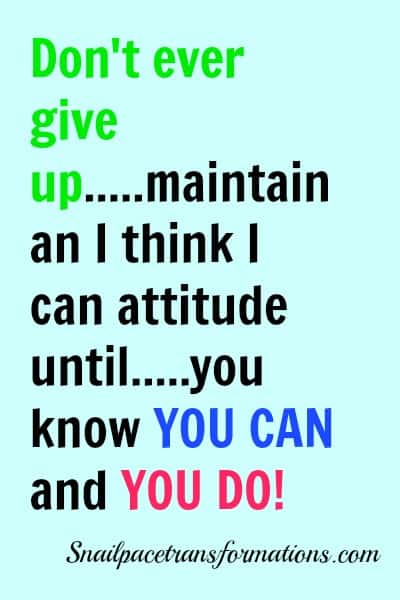 Readers I want you to know if your like me… if you struggle sometimes with learning new things….don’t ever give up…..maintain an I think I can attitude until…..you know YOU CAN and YOU DO!

The Little Engine That Could is the  book that inspired me as a child, still inspires me today.