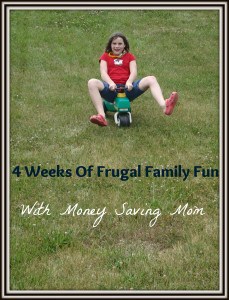 In November of 2011 my teenage son asked me if I would coach him in running. His ultimate goal is to do the Disney World Marathon the winter he graduates, but that is a far ways off yet. This season we are running 5K races.

Running races, is not free but they do not have to be expensive. Our town is relatively small and I have found several local 5K’s that cost between $7 to $15 to enter.

Frugal tip: Enter early, as often you will save yourself a few dollars over entering last minute. 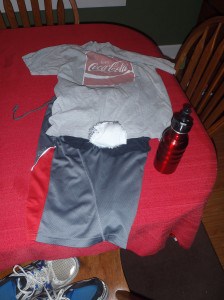 Races start early, and since teenagers don’t like early, I would suggest getting them to lay out all their running gear the night before the race, so that you don’t have to wake them up till the last possible second. 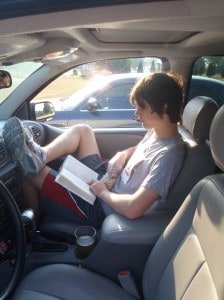 Bring along a book to read and some dry cereal to snack on while you are waiting for the race to begin.

You don’t need to be at  small local races all that early, but I still like arriving at least 20 minutes before they start to get our race packets and number bibs. 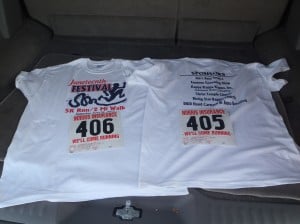 Pretty much every race you enter will give you a t-shirt. My son wears his with pride but I am trying to break my t-shirt wearing rut so I am thinking of following this pin and making a blanket out of them. 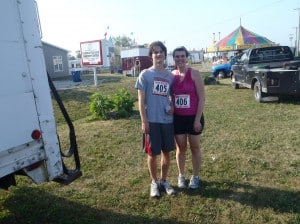 Once the race is done, if it is a small one it is totally worth sticking around for just a few extra minutes. Why?

Because you might win a prize. In smaller races there is less competition, and they also tend to hand out prizes that the larger races don’t.

Winning a prize can be a great morale booster for a teenager (and also for his 38 year old mother).

My son is a teenager, but you can start your children running much earlier if you wish.

I saw a 5 year old running along side his mother who had a double stroller with her, with his brother on one side of it, and a space for him on the other side of it. They ran the 2 mile fun run together, and that 5 year old never did get in the stroller the whole way even though his mother asked him repeatedly if he was wanting to.

The winner of this weekends 5K was an 11 year old boy, whose parents cheered him on from the side lines. He finished in just under 23 minutes.

The key to racing with a child is to make sure they are leading you, not you pushing them.

Right now my almost 10 year old daughter is begging me to coach her like I have her brother, and I think once the heat of summer is over, I will start.

We will build up slowly just like I did with her brother, but come this time next year she too just might be ready for her first 5K.

How about you? Does your family enjoy any sports together?